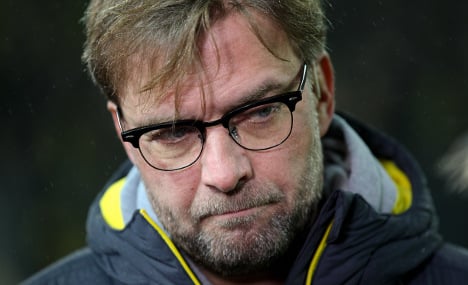 The 47-year-old, who joined the club in 2008, has three years left on his contract but announced that he will step down in the summer because he is "no longer the perfect coach for this extraordinary team".

According to Bild, part of the reason behind the decision was a desire to recharge his batteries after a successful seven-year spell at the club, but Klopp denied this.

"It's got nothing to do with me being tired, and I have no intention of taking a year out. Nothing is planned," he said.

His team captured Europe's imagination in particular when they thrashed Spanish giants Real Madrid 4-1 in the semi-final of the Champions League in 2013 with their exciting brand of fast-paced football.

But BVB have encountered a difficult period this season, which saw Klopp's men struggling at the bottom of the table at one stage. Since then they have returned to a more comfortable mid-table spot.

He also denied that the current situation had influenced his decision, which he said was based only on the "future of the team".

He stressed the need for change and that he didn’t want the past to get in the way of the development of a young squad with "fantastic potential".

"For a fresh start big names need to go, and that's me. As long as I'm here, everything we do will be compared to past successes," he said.

Bild had suggested Klopp would be replaced by Thomas Tuchel, the 41-year-old who has taken a one year sabbatical after leaving Mainz in May 2014.

But unsurprisingly club CEO Hans-Joachim Watzke refused to comment on Klopp's successor, and stressed that the club would not be rushed into finding someone before the end of the season.

The news has sparked speculation in England, where Klopp is being linked to a number of major jobs. Manchester City seems the most likely with current manager Manuel Pellegrini under severe pressure after a disappointing season, which was compounded by a 4-2 derby drubbing at the hands of rivals Man Utd on Sunday.

But again the speculation was squashed immediately by Klopp, who said he has had no contact with any other clubs.

Despite Klopp's bubbly personality there was a rather sombre atmosphere at the press conference. As such a glorious era in the club's recent history came to an end, everyone seeming slightly overcome with emotion.

"It's very unusual in football for a story to last seven years," Klopp said with a smile.