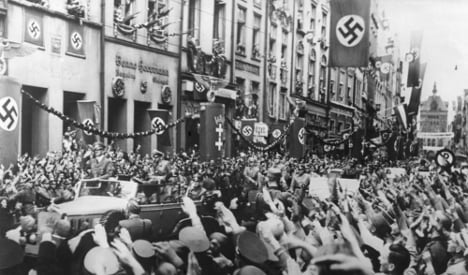 The song, the Horst-Wessel-Lied, was the anthem of the Nazi party and includes the lyrics 'Millions full of hope look up at the swastika' and 'Soon Hitler flags will fly over every street.'

The incident took place in March during an eleventh grade lesson, meaning the pupils were roughly 17 years old.

Police spokesperson Stefan Redlich told The Local that they had followed up on the case after it was reported by someone not present during the class.

The police attempted to ascertain whether the incident was a crime against the German constitution.

Under paragraph 86 of the constitution it is illegal to publicly display Nazi symbols. This includes publicly singing the party's songs.

The maximum penalty for this offence is three years in jail.

But the constitution makes clear that there are exceptions for art, science and teaching.

“A Museum can display a swastika if it does so in a critical setting,” explained the police spokesman.

Police therefore looked into whether the teacher had taught the song in a critical context or not.

The teacher claimed that the song was contained in the school curriculum, a claim which the police were not able to confirm because they had not seen a copy.

Officers sought to question the pupils who were present to evaluate if the song was presented in a critical context. But the school refused to supply them with the pupils' names.

The case has now been handed to state prosecutors, who will decide whether to pursue it or not.