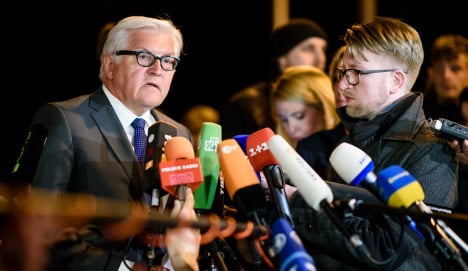 As surging fighting around hotspots put fresh pressure on the accord, the four gathered late Monday to assess progress in the truce deal agreed in February between the Ukraine government and pro-Russian rebels to end a conflict that has killed more than 6,000 people over the past year.

Foreign Minister Frank-Walter Steinmeier admitted the five-hour-long talks had been "very long, very intensive and at times very contentious" given the tense situation on the ground.

"We must ensure that the ceasefire is respected a lot more comprehensively than it was in recent days," he told reporters.

In a final statement, the four ministers expressed "grave concern at the recent outbreak of fights over the last weekend".

This included the use of heavy weapons around the village of Shyrokyne, on the outskirts of the strategic port city of Mariupol, and at Donetsk airport.

After weeks in which the ceasefire agreed in the Belarussian capital Minsk appeared to be largely holding despite isolated skirmishes, clashes seemed to be mounting in flashpoint areas.

Ukrainian army spokesman Oleksandr Motuzianyk said Monday one soldier had been killed and six hurt in the past 24 hours. Separatist officials said four civilians had been injured in the conflict zone.

European OSCE monitors reported "renewed intensive fighting" Sunday around the rebel stronghold of Donetsk, with more than 1,166 explosions in under six hours, mainly from artillery and mortar fire.

In accordance with the Minsk deal, the two sides claim to have withdrawn heavy arms from the frontline but the OSCE said "weapons with a calibre larger than 100mm were used by both sides during the fighting".

NATO believes Russia has supplied more troops and weapons to the rebels, an unnamed alliance official was quoted as saying at the weekend by German daily Frankfurter Allgemeine Zeitung.

The ministers in Berlin renewed their call for the withdrawal of such weapons, and extended the appeal to include "heavy weapons below 100mm as well as all types of tanks".

They underlined their appeal to both sides "to establish permanent and unfettered access" for monitors from the OSCE, which also dispatched representatives to the meeting in the German capital.

Steinmeier said as the talks got underway that there had been "a certain calming of eastern Ukraine" in the last two months and that it was now key to move forward with concrete measures that would improve the situation for those living in the area.

The ministers said that with this aim, it was crucial that three-party working groups on security, the political process, humanitarian issues and economic affairs and rehabilitation be launched "as soon as possible" with representatives from Russia, Ukraine and the OSCE.

France and Germany said that their junior foreign ministers would continue to "oversee the implementation" of the Minsk accord with their Russian and Ukrainian counterparts.

"We remain committed to support the process whenever necessary," the four ministers added.

The results of the talks in Berlin will be discussed at a meeting of G7 foreign ministers in the northern German city of Lübeck on Tuesday and Wednesday.

Russia will once again not participate. It has been closed out of the group of the world's largest economies since the annexation of the Crimea in March last year.

US Secretary of State John Kerry will arrive on Wednesday after attending a US Congress hearing on the nuclear deal with Iran on Tuesday.

The discussions will lay down the groundwork for the main G7 summit to be held on June 7th and 8th at the Elmau Palace in Bavaria.

The two meetings take place during Germany's year-long chairmanship of the group.

Other themes up for discussion will be the nuclear deal with Iran, the conflict with Isis in Syria and Iraq, and improving defence mechanisms against the Ebola virus.

Protests are planned against the meeting, and organisers expect several thousand to turn up. The police meanwhile have called up 3,500 officers to deal with potential violence.