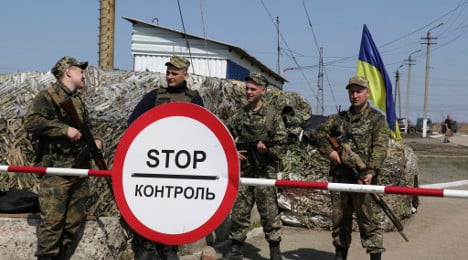 Ukrainian government troops at a checkpoint near Mariupol on Sunday. Photo:DPA

"We expect both Moscow and Kiev to seize the central issue of the implementation of the next phase of Minsk," Steinmeier said in an interview in Monday's edition of Die Welt newspaper.

The next phase foresees "the preparation of local elections in the areas occupied by the separatists, but also humanitarian access and reconstruction in eastern Ukraine," Steinmeier said.

The German minister will host his counterparts from Ukraine, Russia and France in Berlin on Monday to study the implementation of the Minsk accords that have stopped much of the fighting despite frequent violations.

Steinmeier said progress had been made, pointing to the "well-advanced withdrawal of heavy weapons".

An unnamed Nato official told another newspaper, the Frankfurter Allgemeine Zeitung, on Sunday that Russia was still supplying troops and weapons to the separatists in Ukraine, in violation of the Minsk accords.

Steinmeier said observers from the Organization for Security and Cooperation in Europe (OSCE), who are operating in east Ukraine, were making progress, "but it is not enough".

The OSCE this week demanded that both the pro-Russian separatists and the regular Ukrainian army stop intimidating or restricting the movements of its 400 monitors.

The results of the talks in Berlin will be discussed at a meeting of G7 foreign ministers in Lübeck, Germany, on Tuesday and Wednesday.