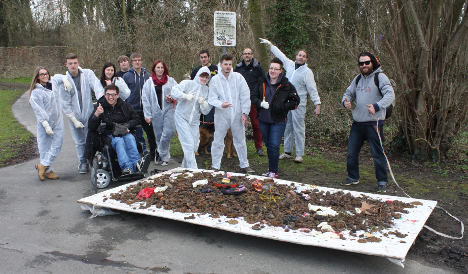 The protesters in Einbeck with their unpleasant loot. Photo:DPA

“It wasn't easy.” said Martin Keil, one of the protesters. Four people were needed to lift the sack stuffed full with brown waste and tie it round the statue's neck.

“We collected about 250 kilograms of dog crap from parks and paths,” he recalled, explaining that they were driven to the dirty task after becoming fed up with having to side-step the stinky stuff every time they left their houses.

“On Easter Saturday at about four in the morning we hung the bag up.”

But Keil said the town authorities were quick to react. “By eight they had taken it back down.” The protesters chose the statue because it depicts Till Eulenspigel, a well-known jester in German folklore.

“Like the jester, we wanted to hold up a mirror to society,” said Kiel.

The statue was particularly suitable because the jester has a dog by his side.

A sign that the group hung around his neck reads “As a dog owner, I say 'that is shit'”.

And this isn't the first time dog mess has got Einbeckers hot under the collar.

In 2012, after local authorities removed public rubbish bins from the city centre, dog owners simply left bags filled with their four-legged companions' business where the bins had once been in rpotest.

But a spokesperson for the town authorities placed the blame for the most recent flare up in this dirty issue squarely at the feet of dog owners.

There are enough disposal places for the dog mess, said Arnd Severidt.

“When the authorities are around dog owners takes out their bag and scoop up the poo. But when we're not there they don't really bother.”