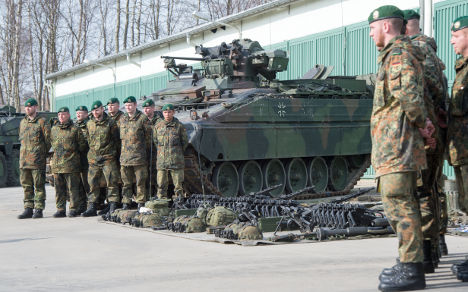 Soldiers from the 371st Panzergrenadier Battalion demonstrate their equipment in March 2015 Photo: DPA

Spokesman Mariusz Lewicki said in Eindhoven on Thursday that the alliance had drawn “positive conclusions” from the training by the Very High Readiness Joint Task Force (VJTF).

Around 900 of the 1,500 personnel involved in the 12-nation exercise are based in Germany, where they are supposed to be ready to leave their bases in Saxony, Thuringia and Rhineland-Palatinate with their vehicles and equipment within five days. The VJTF was formed in response to growing fears over the threat Russia poses to bordering countries such as Latvia, Estonia and Lithuania in the wake of the Ukraine crisis.

By holding forces ready to be deployed at any moment, the alliance hopes to deter Russia from any aggressive moves towards its neighbours in north-eastern Europe.

It is widely believed that pro-Russian separatists in eastern Ukraine were reinforced by Russian troops who had removed insignia and identifying marks from their uniforms.

The Bundeswehr (German army) said in a statement that deputy Chief of Staff Lieutenant-General Jörg Vollmer would inspect panzergrenadiers (motorized infantry) taking part in the exercise on Friday.