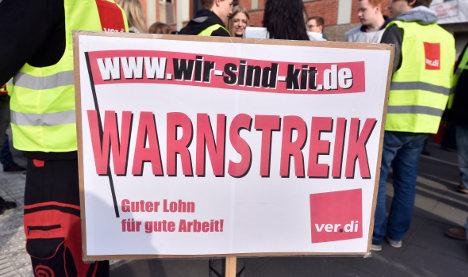 The strikes are affecting Bavaria, Hesse, Baden-Württemberg and Saxony.

Focus reports that over 400 kindergartens in Bavaria alone have been affected by the strikes.

The walk-outs follow on from Tuesday's strikes in Hamburg and Lower Saxony.

Ver.di called the strikes in the build up to the next round of negotiations on pre-school teachers' salaries, set to be held on Thursday in Düsseldorf.

The trade union is demanding that the pre-school teachers be put in a higher pay grade, meaning they would stand to earn several hundred Euros more per month.

According to the Hannoversche Allgemeine Zeitung the strikes will not go away any time soon.