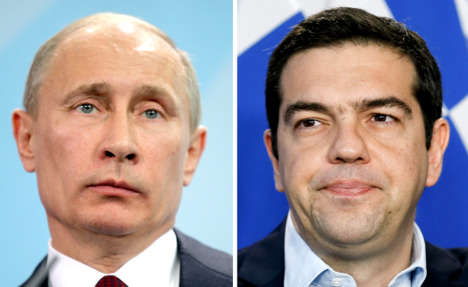 Lavrov accused the EU of putting up an "anti-Russian front" and said that Greece was right to break ranks.

"More and more countries are becoming aware how counter-productive sanctions against Russia are," he told the Interfax news agency.

"The heads of government of both countries will discuss Russian suggestions along these lines on Thursday," he said.

Elements of the German media and political establishment had found themselves in convulsions of fear on Wednesday morning ahead of Tsipras' visit.

"Are Putin and Tsipras forging an anti-Merkel pact?" shrieked Bild's headline. The tabloid claimed that Tsipras “could hardly wait” for the trip to get started, arriving the evening before in anticipation.

Bild went on to list the order of events in Tsipras' diary before saying that the question “which the whole world is asking itself is: what are Tsipras and Putin really planning with their meeting behind the Kremlin walls so soon before a possible Greek bankruptcy?”

For Bild, the discussions can only be of a nefarious nature. It describes Tsipras as Putin's Trojan horse in Europe.

German politicians have also been quick to warn Tsipras against betraying the Union.

Martin Schulz, Social Democrat and President of the European Parliament said that he could only advise the Greek prime minister not to toy with European unity, reports Die Zeit.

Meanwhile Christian Democrat Elmar Brok, head of the foreign relations committee in Brussels, told Die Welt that the visit was a “threatening gesture.”

“He wants to show that Greece has other options,” said Brok.

Tsipras' visit is to last two days, with a planned meeting with Putin on Wednesday followed by talks with prime minister Dimitry Medvedev on Thursday.

Up for discussion are economic ties, but above all the damaged relations between Russia and the EU due to the Ukraine conflict and the consequent economic sanctions against Russia.

Die Zeit reports fears that Russia may lift sanctions on Greek vegetables to alleviate the pressure on the Greek economy.

Russia currently has a Europe-wide embargo on agricultural purchases as a response to the EU's economic sanctions.

The Greek economy is reportedly threatened with bankruptcy. The country's creditors have put €7.2 billion in loans on hold until Athens produces reform proposals which meet their satisfaction.