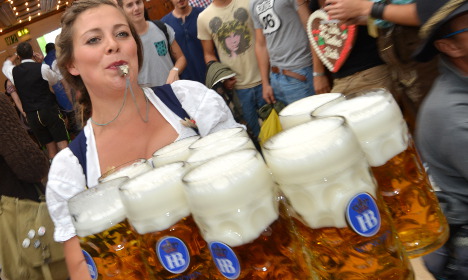 This lot could soon set you back more than €100. Photo: DPA

“We are expecting beer prices to rise by three to four percent,” landlords' spokesman Toni Roiderer, who runs the Hacker tent, told Bild on Tuesday.

Although servers at Oktoberfest are usually paid more than the minimum wage – it's a notoriously physically demanding job which some train for at the gym in the weeks beforehand – new working time regulations are to blame for the rise.

Servers now have to be given days off in lieu for the Saturdays and Sundays they work during the three-week celebration.

Now that the customs office – renowned for its strictness – is responsible for supervising how the law is applied, there is likely to be little flexibility in enforcement.

“The outcome for us is that we need up to five percent more people,” Roiderer said – and not just among servers, but also for security guards and tent construction.

He and his fellow landlords have been fighting against any kind of new regulation affecting the festival, saying that "Labour Minister [Andrea] Nahles is wrecking our festival tent culture in Bavaria."

“One day we'll have punch-clocks on the Wiesn [Oktoberfest venue],” Löwenbräu tent manager Wiggerl Hagn joked to the newspaper.