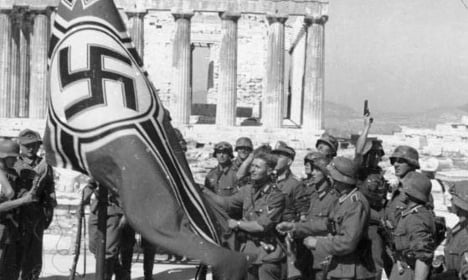 “Honestly, I find it stupid,” said the Social Democratic Party (SPD) leader at a meeting at the ministry.

By coupling the two issues, the Greek government is playing into the hands of those hostile to it, he added.

Greece's deputy Finance Minister Dimitris Mardas told the parliament in Athens on Monday evening that Germany owes his country €278.7 billion in Second World War reparations.A parliamentary committee and the Greek supreme court arrived at the figure after examining previous studies, which set the figure Germany owes Greece at between €269 billion and €332 billion.

But in the dispute over reparations, which has soured German-Greek relations for decades, the German government maintains that the question is closed.

Germany paid Greece 115 million marks in 1960, and the government insists that this payment covered all of its debts.

Greece also came in for heavy criticism from the European Parliament on Monday, with conservative EPP group leader Manfred Weber warning Greek Prime Minister Alexis Tsipras against cosying up to Russia in advance of his trip to Moscow.

The visit, planned for Wednesday, was “untimely” given the climate of tension between Russia and the EU over the Ukraine crisis, Weber told the Tagesspiegel on Monday.

But Greek government officials denied that they would seek financial aid from Russia instead of their EU partners.

“The solution to the crisis affects the European family and must be found within the framework of the EU,” Finance Minister Yanis Varoufakis told business newspaper Naftemboriki.

Greece still has to convince its creditors, the European Commission, International Monetary Fund and European Central Bank, of the soundness of its economic reform plan.

If a new tranche of €7.2 billion in loans is not approved soon, Greece could be threatened with bankruptcy.

Negotiations over the country's debt are expected to continue in Brussels this week.