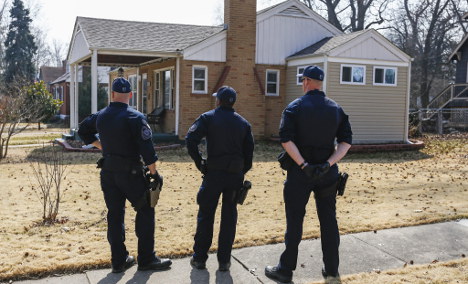 The journalists, Ansgar Graw of Die Welt, Lukas Hermsmeier of Bild and Frank Hermann, a freelancer for regional newspapers were arrested and detained for “refusal to disperse.”

They had been covering riots sparked by the death of black teenager Michael Brown at the hands of local law enforcement.

Graw told The Local the the police never gave him any official reason for his arrest but that his mugshot was accompanied by the text “refusal to disperse.”

The correspondent said that the case was not about him but about asking “whether a county in the USA can accept that their police violate freedom of the press.”

“The American police overstep their rights very clearly and too often,” he said.

The circumstances which led to his arrest are the stuff of farce.

On a Monday afternoon, when there were no crowds present, just himself, Hermann and twelve police officers, Graw says that an officer threatened to arrest them.

He pointed out that he wanted to photograph a gas station which had been set on fire the night before.

The officer consented but told him he would have to keep moving to avoid arrest.

“I walked around in circles while photographing, so as to try and make my work compatible with the officer's demands. This apparently wasn't to his satisfaction so he asked his colleague to handcuff me.”

The legal justification is totally spurious, said Graw. “The law applies in the case of a riot or an unlawful assembly.”

The journalists are arguing that their incarceration was a violation of the First, Fourth and Fourteenth Amendments to the American Constitution, which cover freedom of speech, freedom of the press and protection against unlawful arrest.

Graw, who has been based in Washington since 2009, also complained that conditions in prison were meant to “humiliate” him. He was not only handcuffed but also chained to a wall.

He sees a difference between how police in the United States act in comparison with Germany.

"In America the attitude is 'We are the law and you have to accept whatever we tell you.'”