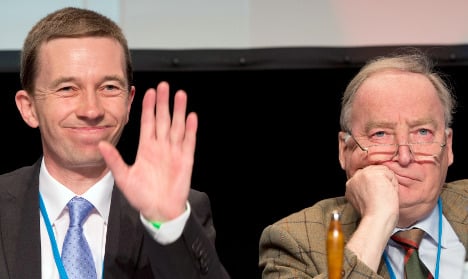 In public Lucke still talks about the “ success story” of the AfD, which he claims has managed to challenge the government's policy of propping up ailing southern European economies.

But the chaos which has consumed the party in recent months resembles an embittered family gathering more than the “diversity of opinion” which Lucke describes.

At the beginning of the year AfD leaders in Brandenburg and Saxony, Alexander Gauland and Frauke Perty, tried to curtail Lucke's power and steer the party further to the political right.

Lucke was just able to hold onto his power at the party conference in January, when a narrow majority of party members voted to reject the east German pair's attempted coup.

Now another politician from former east Germany is taking up the role of right-wing rebel.

In March Björn Höcke, party chairman in Thuringia, published the “Erfurter Resolution” in which he accused the party leadership of a “betrayal” of its founding ideals.

But it also caused serious upset amongst more centrist party members. One financial donation to the AfD summer congress recently came with the message “so that the AfD remains a civic alternative and doesn't mutate into an far right splinter party. No to Björn Höcke!”

These fractious internal disputes appear to be affecting the AfD's popularity. Polls show them stuck on between five and six percent support nationwide, just above the cut-off line for representation in state and federal parliaments.

The party's popularity in former east Germany has so far also not been reproduced in the west of the country.

In 2014 the AfD won over 10 percent of the vote in state elections in Thuringia and Brandenburg, and 9.7 percent in Saxony.

But in the two state elections it has fought in former west Germany, the party's best result was a less impressive 6.1 percent in Hamburg in February of this year.

Recent polling also shows increased public support for the single currency and the government's policy on Greece, the two bête noirs of the AfD.

One March poll by public broadcaster ZDF showed that public support for a "Grexit" has fallen to 45 percent.

Meanwhile a March survey on attitudes to the single currency showed that support for the Euro had risen 19 percent since 2013 to 57 percent.