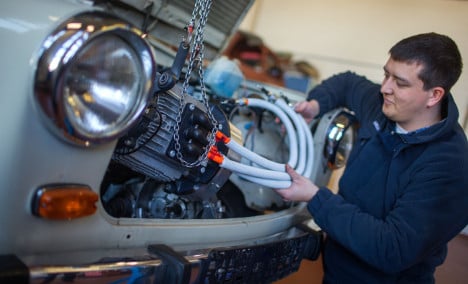 A Trabant being converted into an E-car. Photo: DPA

Renewable energy company ReeVolt has started a project to turn the old East German cars into something fit for the 21st Century by converting them to electric propulsion.

Andre Schmidt, spokesperson for ReeVolt, lists the advantages that come with the Trabi.

“It is a car that is waiting to live again,” he says.

The company first had the idea of converting old cars into e-cars when they successfully put an electric motor in a Volkswagen Beetle just over two years ago.

The next question was “What other car had such a big influence on the German roads as the Beetle?” Schmidt explains. The Trabi, full name Trabant, used to be the pride and joy of communist East Germany.

But comrades had to wait years before a new one was delivered – and old ones were famously more expensive than new ones.

In total over 3.7 million of them rolled off the production line over five decades.

But they were never the most environmentally friendly of vehicles. Nor were they much to compare with their West German equivalents.

To West Germans they were a slightly charming symbol of the dysfunctionality of their communist neighbours. Top speed was 100 km/h and the fuel insertion system meant that in the event of a crash, a fire breaking out was highly likely.

But 25 years after the fall of the Berlin Wall memories have become more rose-tinted and 'Ostalgia' – nostalgia for the days of communism – grows ever stronger.

So it make sense that the first customer for the newly kitted out Trabis was the Tourist Board in Rügen, an island on the Balitc coast in Mecklenburg Vorpommen, the northernmost state in the former east Germany.

They have ordered three of the cars which they will offer for tours around the island.

“It is something for people with a love for Trabis; it is about beautiful memories,” Schmidt explains, saying that there is little chance that the project will ever meet a mass market.

But he says “it would be nice if hundreds of Beetles and Trabis were to once again drive along the roads of Germany.”

One more benefit. The new cars should arrive at your door slightly quicker than in the days of communism.

Schmidt says it only takes about two days to convert an old Trabi to electric usage.