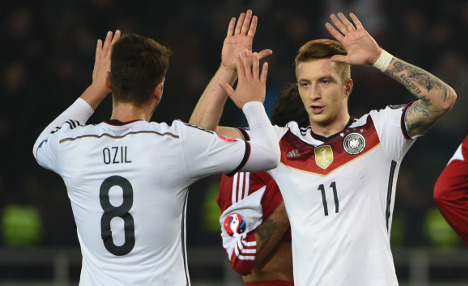 After suffering a shock defeat to Poland and drawing at home to Ireland last October, Joachim Löw's Germany arrived in Tbilisi needing three points to stay in the hunt for top spot in Group D.

Scotland's 6-1 drubbing of bottom side Gibraltar in Glasgow means Germany are level with the Scots on 10 points with Poland one point ahead after their 1-1 draw with the Republic of Ireland later on Sunday.

"Before the game, you couldn't miss the gravity of the situation from looking at the table. We knew we had to win here," said Löw.
"I am happy with the first-half performance, there were some good combinations with well-taken goals.

"But we lost control of the game after the break and we wasted one or two chances."

Germany created 13 chances while restricting their hosts to just two shots, and only an outstanding display from Georgia goalkeeper Giorgi Loria kept his side in the game.

After failing to impress in their seven internationals since winning Brazil 2014, this was a far more polished display from Germany, but there were frustrations with the goalless second half.

"I have mixed feelings, to be honest, we did well in the first half and scored some nice goals, but it was frustrating not to score after the break," said Müller, Germany's top scorer in the qualifiers with five goals.

Having experimented with a 3-1-4-2 formation in Wednesday's 2-2 friendly draw at home to Australia, Löw reverted to the 4-2-3-1 line-up with which he won the World Cup.

Löw started with seven of the side which won the World Cup final while captain Bastian Schweinsteiger made his first appearance since Germany were crowned world champions in Rio de Janerio.

Georgia suffered an early set back when experienced centre-back Aleksandr Amisulashvili was forced off injured, to be replaced by uncapped teenager Lasha Dvali with just four minutes gone.

Georgia are second from bottom of Group D after also losing to Poland, Ireland and Scotland, but the home crowd passionately cheered every counter-attack by the hosts at the sold-out Boris Paichadze stadium.

The Germans went ahead when Mario Götze, who was playing up front, wove his way through the defence and rolled his pass to the unmarked Reus, who drilled home on 39 minutes.

The Borussia Dortmund winger was only denied his second moments later when Loria palmed his long-range shot over the bar.

With half-time beckoning, Mesut Özil's well-timed pass found Müller, who held up his marker and fired home to fouble the lead.

The game's tempo dropped in the second half, but Georgia enjoyed their best period in the final 20 minutes with some sustained pressure.

Schweinsteiger was forced to clear from a late corner as Georgia kept the visitors on the back foot.

The win sets up Germany ahead of their next qualifier away to minnows Gibraltar in June before key qualifiers home to Poland, then away to Scotland and Ireland in September and October.