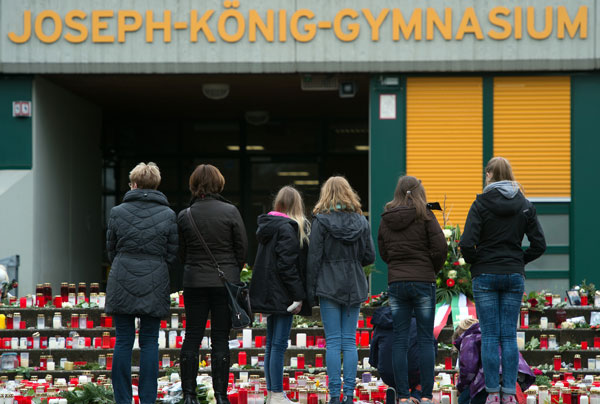 The ceremony will be held at Cologne Cathedral in western Germany, a region from where many of the victims originated, and is due to be attended by German Chancellor Angela Merkel and President Joachim Gauck, a spokeswoman for the regional North Rhine-Westphalia government told AFP.

Families and friends of the victims, as well as representatives from other countries affected by Tuesday's air disaster are invited, she said, adding they also wanted to enable anyone wishing to express their condolences to take part.

Gauck attended a memorial service Friday for 16 pupils and two teachers from a school in the western town of Haltern, who had been flying back from an exchange trip in Spain.

Half of the 150 people on the ill-fated flight from Barcelona to Düsseldorf were German, with Spain accounting for at least 50 and the remainder composed of more than a dozen other nationalities.

French prosecutors believe that co-pilot Andreas Lubitz locked his captain out of the cockpit and deliberately flew Flight 4U 9525 into a mountainside.