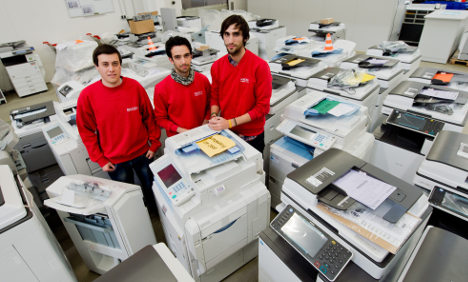 The study warns that over the next fifteen years half of qualified workers in the Bundesrepublik (Federal Republic of Germany) will go into retirement, as the baby boomer generation finally hit the end of their working lives.

As the economies in southern Europe emerge from the Eurozone crisis, net immigration from the EU will drop off sharply, meaning Germany will need to find the solution to its labour force problems outside the European Union.

“Germany can't rely on further high immigration from the EU. We must take the measures now that make Germany an attractive destination for non-EU citizens,” said Bertelsmann Institute board member Jörg Dräger.

The study predicts a staggering drop in Germany's indigenous workforce.

Without positive net immigration, the number of people able to work will fall by 36 percent, from the current number of 45 million to 29 million by 2050.

Even if the percentage of women in employment were to rise to match that of men and the retirement age were raised to 70, the total number of employable people in 2050 would only rise by an extra 4.4 million.

The study's authors acknowledge that the actual requirements of the job market are difficult to predict since factors such as digitalisation could decrease labour requirements. But they nonetheless predict that large scale immigration will be needed to fill this vacuum.

In the past two years several factors including high unemployment in southern Europe and political instability in the Middle East have led to high net immigration towards Germany.

The study estimates that further net immigration on this scale over the next decade will keep Germany's workforce at a stable level. But as the baby boomers enter retirement the need will further rise.

The report warns that  net immigration from within the EU up to 2050 will average only 70,000 per year meaning the shortfall will have to be accounted for in large part by attracting immigrants from outside the EU.

In 2013 140,000 immigrants arrived in Germany from outside the EU, the majority of whom came to study, as refugees from war, or to join up with family. Only 25,000 came with the specific goal of seeking employment.

Dräger argues that the government must urgently rethink its immigration policy to adapt to these requirements.

Germany needs a comprehensible immigration system that makes it clear that qualified immigration from outside the EU is not only allowed but desired, he said, adding that a new immigration law with clear and easy rules and which offers the possibility of citizenship is required.

Dräger cited previous studies which show that countries are attractive to immigrants when they are offered a stake in its future, including opportunities to learn the local language, full integration in the labour market, assurances of social equality and protection from discrimination.

As Germany recruits qualified workers from the third world, its responsibility for the stability of the of those countries will also increase, Dräger added, saying that working to the needs of developing countries would also serve to secure support for increased immigration among the German electorate.

A recent poll by Bertelsmann Institute that found that 43 percent of Germans believe that the government should only offer visas to foreigners when it doesn't harm the development of their country of origin.