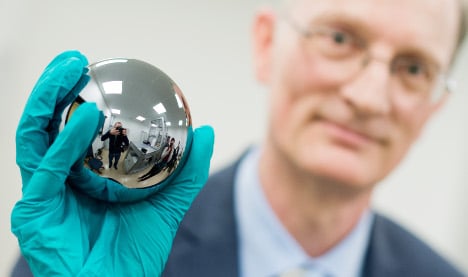 The weight is currently based on a metal cylinder called the International Prototype Kilogram that is kept in a safe in Paris.

The problem is that the precious object is – very gradually – losing weight, according to scientists.

Over the last century it has become lighter by 100 micrograms (0.0001g), which is less than the weight of a dust particle, but the smallest of margins in the field of measurements can make a big difference.

Researchers are worried that the difference could become noticeable in the future, which is why work has begun on an alternative.

A race is now underway between scientists around the world to find a way of defining an unchangeable kilogram without relying on a lump of metal, which is unsurprisingly rather complicated.

Researchers at the PTB in Braunschweig claim to be very close to a solution. They are developing the world's roundest and smoothest sphere.

For this they used the purest silicon to make silicon gas in centrifuges resembling tumble dryers. The gas was then used to make silicon crystals from which two perfect silicon spheres the size of an apple core were formed.

It would then be possible to calculate how many atoms you would need for a kilogram, which all sounds simple enough, but how on earth do you go about counting the number of atoms in an object?

This is possible because of the perfect crystal lattice structure within the sphere, which looks something like a huge stack of drinks crates.

The atoms within the sphere are ordered like bottles in a crate. Scientists know the dimensions of the whole stack (i.e. the whole sphere) and of the individual crates. The number of atoms in the sphere can be calculated by dividing the bigger dimension by the smaller one.

Developing the perfectly round and flat sphere and carrying out the calculations will take until 2018, but then scientists will be able to define a kilogram by a particular number of atoms ,which will remove the reliance on any physical object.