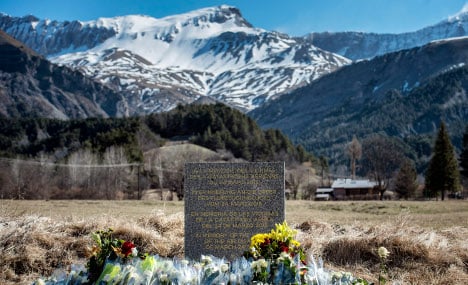 A memorial in the town of Vernet, near the scene of the crash. Photo: AFP
Speculation continues to swirl on Friday as more details emerge about the past life of pilot Andreas Lubitz, who killed himself and 149 Germanwings passengers on Tuesday.
Two of his peers spoke to French newspaper Le Parisien, suggesting that he was more than familiar with the area that the plane crashed.
A member of his gliding club, Ernst Müller, told the paper that he was "certain" that the German had taken part in at least one or two courses in Sisteron, in the Alpes-de-Haute-Provence region.
Another, Dieter Wagner, said: "Andreas participated in one of the courses in the Alpes-de-Haute-Provence with my niece, who was a good friend of his. He was passionate about the Alps, even obsessed".
"I am certain that he knew the crash area because he had flown it in a glider."

(Emergency teams at the scene of the crash. Photo: France's Interior Ministry)
Prosecutors revealed on Friday that Lubitz had a sick leave note from his doctor for the day of the crash, but hid his illness from his employers.
Germanwings responded later in the day that it had no knowledge of a doctor-signed sick note.
Lubitz had a history of depression and had to take an 11-month break from his training in Arizona before qualifying as a pilot, reported German newspaper Bild.
The pilot was briefly listed as "unable to fly" during his training period in the US, the paper reported, while his personnel file at the German Air Travel Authority (Luftfahrtbundesamt) and his pilot's licence were marked with a code, "SIC", indicating he was subject to regular medical checks.
The Rheinische Post reported that the Uniklinikum hospital in Düsseldorf said it had last treated Lubitz as a patient between February and March 10th 2015.

Sources told the newspaper that Lubitz was undergoing diagnosis for physical, not mental symptoms.

READ ALSO: What we know about Andreas Lubitz (The front page of German newspaper Bild on Friday. Photo: The Local.)