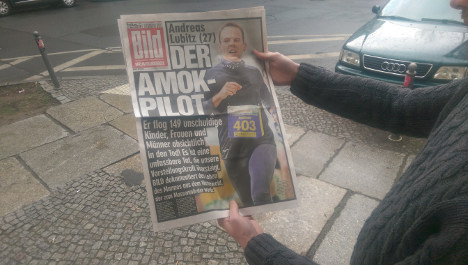 The newspaper said it had seen internal documents and Lufthansa sources, which confirmed that Lubitz had spent one and a half years in psychiatric treatment.

It reveals that Lubitz was briefly listed as “unable to fly” during his training in Phoenix, Arizona and had to repeat several parts of his training.

Bild also discovered that his personnel file at the German Air Travel Authority (Luftfahrtbundesamt) was marked with the code “SIC” – indicating that he was subject to regular medical checks, as was his pilot's license.

He was under medical treatment for a total of 18 months, Lufthansa sources told the paper.

Security sources also said that Lubitz had been suffering particularly from a recent relationship crisis with his girlfriend.

Police searching Lubitz's home said on Friday they had seized evidence but no "smoking gun".

Officers combing through a flat kept by Andreas Lubitz in the western city of Düsseldorf said they had seized "various items and papers", police spokesman Marcel Fiebig told AFP.

"We will see whether this will explain what happened — everything is being examined," he said, adding that there was no "smoking gun" to shed light on a possible motive.

Düsseldorf prosecutors have opened a parallel inquiry to the main investigation underway in France as many among the 150 crash victims were from the German region.

Lubitz, who local authorities say was 27, spent most of his time at his parents' home in the small western town of Montabaur.

That upscale residence on a quiet leafy street was also cordoned off by police Thursday and searched as camera teams massed outside.

The city's public prosecutor said in a written statement that searches in Düsseldorf and other places were aimed at "the discovery and securing of personal documents" to help clarify the situation.

French state prosecutors investigating the crash said that the flight voice recorder indicated Lubitz had been breathing calmly in the minutes before the crash and didn't say a word.

Peter Rücker, an acquaintance from Lubitz's glider club, where he had been flying since the age of 14, said he was “funny, and perhaps sometimes a bit calm”.

Lufthansa CEO Carsten Spohr had confirmed that Lubitz took time out from his training with the company, but said that German confidentiality rules did not allow him to explain the reason.

But Spohr insisted that Lubitz had passed all tests and medical exams and had been completely fit to fly.

Copilot #AndreasLubitz was active as copilot since 2013 on the A320 model. He passed all medical tests and all flight school + exams #4U9525

#AndreasLubitz was 100% flight capable, with no reservations or limitations #Germanwings #4U9525

A Lufthansa spokeswoman told Reuters on Friday that the airline would not comment on the health of the pilot.