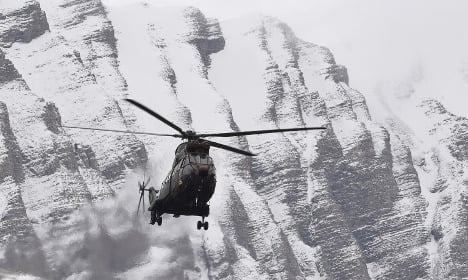 A helicopter flies at the scene of the crash site in the French Alps. Photo: AFP
What do we know so far?
A senior military official involved in the investigation has said that the audio from the "black box" flight recorder reveals that one of the pilots left his seat and then exited the cockpit, reported both the New York Times and the AFP news agency.
It was later confirmed by the Dusseldorf state prosecutor.
He can then be heard knocking lightly on the door in an attempt to get back in. Soon after, he can reportedly be heard trying to break the door down.
No conversation is heard. Minutes later the plane hit a mountain in the French Alps, killing all 150 on board.
It remains unconfirmed which pilot was in the cockpit and which was locked out, but French newspaper Le Monde reported that the lesser experienced co-pilot was the one outside the cockpit.
READ ALSO: Germanwings pilot was 'locked out of cockpit' (One of the pilots was locked out of the cockpit, reports say. Photo: Mark Harkin/Flickr)
Who were the pilots?
The co-pilot had been on the job since September 2013 and had 630 hours of flying experience. He "was First Officer at Germanwings since September 2013," a Lufthansa spokeswoman told AFP.
By comparison the plane's pilot had more than ten years experience and 6,000 hours of experience flying the Airbus A320 model.
Neither of the pilots have been named.
Was there someone else inside?
French aviation safety expert Christophe Naudin told The Local that it remains unclear whether someone else may have gained entry to the cockpit.
"We don't know whether the pilot left and was locked out or someone else entered the cockpit and locked him out," he said.
"What's troubling is that apparently we don't hear voices anymore once the door is locked."
IN PICTURES: A timeline of the French Alps crash (Hundreds of emergency workers are on the scene. Photo: AFP)
Why couldn't the pilot get back in?
There are different levels when it comes to locking the cabin door.
Generally, a pilot can re-enter the cockpit using a special code, but even this can be manually overridden by whoever is in the cockpit.
This is designed to keep the pilots safe in the potential case of a terror attack – meaning that no one can get inside the cockpit without the captain's express permission.
This switch may have been turned on while the co-pilot was outside the cockpit on the Germanwings flight. If so, it remains unknown if the lock was turned on deliberately or due to technical fault.
Once the cockpit door is securely locked it is impossible to gain access, even with the code, explained Naudin.
Reinforced cockpit doors were installed on all planes at the behest of the US in the aftermath of 9/11.
"This case could show that having reinforced doors does not necessarily increase security and safety on airplanes," Naudin said.
What was happening with the pilot inside?
This is the biggest mystery. No distress signal was sent from the plane and the crew failed to respond to ground control's desperate attempts to make contact.
Authorities have said the plane was still flying at the moment of the crash, meaning it did not explode mid-air.
Aviation experts have suggested several theories.
"If the pilots did not stop the airplane from flying into the mountains, it is because they were unconscious or dead, or they had decided to die, or they were forced to die," one expert told the AFP news agency.
Authorities hope to find the second black box to reveal more. (The first black box, above, revealed that one of the pilots left the cockpit)
Theories?
A theory put forward by several pilots and ex-BEA investigators is that the plane lost cabin pressure and that the oxygen masks did not work, reported the AFP news agency.
In that case, the pilots could have fallen victim to hypoxia, or oxygen starvation.
This is what happened in the case of a Helios Airways Boeing 737, which crashed on August 14, 2005, killing all 121 people on board.
In the case of the Germanwings plane, it is too soon to rule out other options such as one of the pilots committing suicide.
How does the cockpit door's locking system work?
It's complicated. Here is a video showing how the system is meant to work on an Airbus. If the pilot inside was unconscious or unresponsive, it explains how the other pilot was unable to enter. It remains unknown if a third person was in the cockpit at the time.
Could there have been a problem with the plane?
Unlikely. The head of France's Bureau d'Enquetes et d'Analyses (BEA) crash investigation agency, Remi Jouty, told reporters he still had "not the slightest explanation" for the tragedy at this stage.
"It is inexplicable. The plane was in perfect condition and the two pilots were experienced," Lufthansa chief executive Carsten Spohr said in Frankfurt.
Weather did not appear to be a factor in the crash, with conditions calm at the time, and Germanwings had an unblemished safety record.
How were the passengers reacting?
While the unconfirmed reports mentioned nothing about noises coming from the passengers, just the thought of a pilot desperately trying to break into his own cockpit is terrifying enough.
Especially considering that the plane plunged a full eight minutes before it crashed into the mountainside.