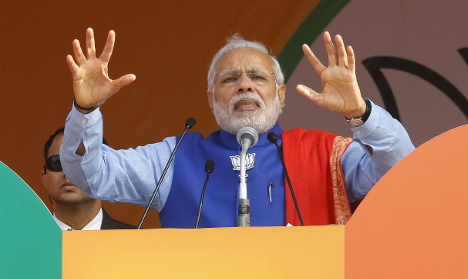 “When Angela Merkel meets Narendra Modi she should tell him that investment programs in his country – for which he is certain to want the involvement of German companies – cannot come at a cost to the rights of the local population,” said Amnesty's Michael Gottlob on Wednesday.

Gottlob made the comments after the Indian foreign ministry announced earlier in the day that Modi will come to Germany in April as part of a state tour which will also take in visits to France and Canada.

The tour is expected to focus on attracting investment to India.

Gottlob was particularly critical of Modi's record on women's rights and religious equality.

“He still hasn't made a clear and convincing intervention against misogynistic statements from within his own party,” Gottlob said, pointing out that Modi's government banned the broadcasting of a BBC documentary looking into a brutal rape which took place in 2012.

The Amnesty expert also expressed anger at Modi's stance on religious tolerance, pointing out that hatred towards Muslims and other religious minorities from within Modi's Hindu nationalist BJP party and associated groups was still rife.

“When Modi subsequently distances himself from such actions, this isn't enough. If he really wants to stop it he must make his influence over these organisations count.”

Modi was governor of Gujarat in 2002 when over 1,000 Muslims were killed in inter-religious violence in the province. He was subsequently accused by rights groups of allowing the violence to continue unhindered.

Modi won a landslide election victory last May on a pledge to revive India's economic fortunes, and has embarked on an ambitious drive to attract more foreign investment to the country of 1.2 billion people.

A spokesperson for the Indian foreign ministry indicated that the Indian leader would continue his tradition of addressing members of the diaspora.

"The PM loses no opportunity to engage with a large number of Indians," said the spokesperson, adding that a detailed itinerary for his visit was still being finalised.

Modi has addressed large public gatherings of overseas Indians during visits to the United States and Australia.