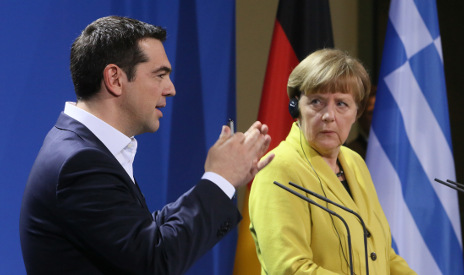 Tsipras, making his first visit to the German capital since taking office in January, said "neither are the Greeks lazy louts nor are the Germans to blame for Greece's ills — we have to work hard to overcome these stereotypes".

Merkel told the same joint news conference that she agreed that Europe must "surmount these types of stereotypes" about good and bad eurozone members to ensure the future of the currency union.

After weeks of bitter acrimony between the new radical-left government in debt-mired Greece and Germany, the eurozone's effective paymaster, both leaders were at pains to stress common ground.

"We both have a vested interest in building cooperation based on trust," Merkel said.

Tspiras praised Merkel, who has been caricatured as a bloodthirsty Nazi on the streets of Athens for her insistence on swingeing reforms, as a straight-shooter.

"Ms Merkel listens and wants to make progress in discussions," he said.

But entrenched differences also emerged during the 35-minute press conference held between an initial round of talks and a working dinner at Merkel's imposing glass-and-steel chancellery.

Tsipras said the budget cuts and structural reforms demanded over the last five years in exchange for two enormous bailout programmes had not been a "success story" but rather brought his country to its knees.

The austerity path Merkel has championed has had "horrible effects" including mass unemployment, widespread poverty and social unrest in Greece.

"A new political mix must be found," he insisted while pledging more decisive action than his predecessors on fighting corruption and tax evasion.

Merkel for her part repeated her usual refrain that the only sustainable solution to the debt crisis is fiscal discipline.

"What is crucial is that the economic fundamentals are there. What types of reforms are implemented can be discussed with the institutions," she said, referring to the "troika" of the European Commission, the European Central Bank and the International Monetary Fund.

And she backed away from the frequent portrayal of the Greek debt crisis as a zero-sum game between Berlin and Athens.

"Germany is not the institution that decides whether the reform programme is correct or sufficient," she said.

Greece's creditors agreed in February to extend its €240-billion bailout by four months in exchange for promises of further reforms.

At an EU summit last week, Athens lobbied Brussels to release vital funds left in the bailout package to help it make payments to creditors in the coming days, and avoid bankruptcy and a possible exit from the euro.

Instead, the EU offered two billion euros in unused development funds to Greece after Tsipras vowed to clarify its reform pledges. But that money will not go into government coffers to service its debts.