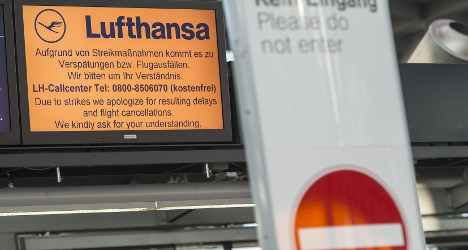 More than 200,000 passengers have been affected during this week's walk-out. Photo: Daniel Maurer/ DPA

In a statement released on Friday, Lufthansa said it had grounded 74 out of a total 160 inter-continental flights scheduled for Saturday, affecting an estimated 20,000 passengers.

And around 60 percent of Lufthansa Cargo flights would also be hit.

Originally, the pilots' union Vereinigung Cockpit had initially called for a 24-hour walkout on Wednesday, but subsequently extended the industrial action over four days.

In all, around 220,000 passengers have been hit by the four days of
walkouts, Lufthansa calculated.

It is the 12th — and now longest — stoppage since the pilots began their industrial action last April.