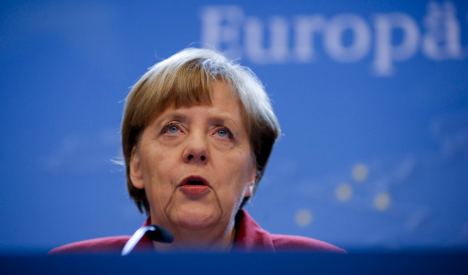 Angela Merkel at the EU Summit on Thursday. Photo: DPA

The leaders of the 28 states agreed that the sanctions against Russia, which hit both its trade and investment sectors, will be upheld until the terms of the Minsk Freedom Protocols, agreed upon in mid-February, have been fulfilled.

The Süddeutsche Zeitung reported that Merkel and Hollande, who were instrumental in setting up the Minsk accords, were the driving forces behind the extension of the sanctions programme.

The sanctions must now be confirmed by the European Council before the current sanctions' time-frame runs out in July.

“The duration of economic sanctions will be clearly linked to the complete implementation of the Minsk agreements, bearing in mind that this is only foreseen by the end of 2015,” said Domal Tusk, president of the European Council.

By linking the sanctions to the peace process, the EU states want to compel Russian President Vladimir Putin to use his influence among the separatist forces in the East of Ukraine for a dampening of tensions.

European diplomats claim that the sanctions have already cost Russia hundreds of billions of euros in lost revenue.

Southern European economies have been among the hardest hit by the sanctions, as Russia has retaliated with a ban on imports of certain European agricultural products.

Greece has consistently called for internal European compensation to ease the strain on its already suffering economy.

Athens has never ruled out vetoing further sanctions, which it could technically do at the level of the European Council.