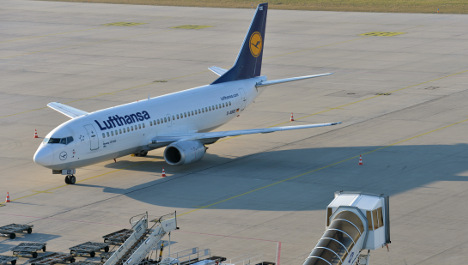 An aircraft in Lufthansa livery sitting on the tarmac at Leipzig airport. Photo: DPA

Just over half of the carrier's scheduled 1,400 domestic and European flights to and from Frankfurt and Munich were grounded, affecting around 80,000 passengers, a Lufthansa spokesman said.

The strike was set to continue throughout Thursday when it will shift to target long-haul and cargo services.

The two-day walkout is the 12th bout of strike action to hit the German airline since last April over management plans to change the pilots' transitional pension arrangements.

A Lufthansa spokesman said the airline had sought to warn passengers of Wednesday's strike ahead of time via 20,000 text messages sent by mobile phone and 7,000 emails.

At Munich and Frankfurt airports, there were no reports of large groups of stranded passengers early Wednesday, national DPA news agency said.

Pilots' union Vereinigung Cockpit (VC) announced late on the eve of the walkout that the initially planned one-day stoppage would be extended to Thursday.

Lufthansa slammed the latest action as "incomprehensible" and said it planned to maintain the bulk of its around 3,000 daily flights on Thursday, with most of the affected passengers offered alternatives.

Pilots are also concerned over Lufthansa's aim to further develop its low-cost activities as it faces growing competition.

Lufthansa said in a statement late Tuesday that calling Wednesday's strike lacked "any proportionality", and that the extension was "completely incomprehensible".

It had made an improved offer to the pilots' union in recent days, Lufthansa said, calling on VC to immediately continue talks.

"Instead of working on sound solutions for the future, the VC is inflicting damage now on Lufthansa customers worldwide," it fumed in a statement.

It also said it was "irresponsible" to refuse any form of negotiation over "privileges" for around 5,400 of the company's 12,000 workers.

For its part, Vereinigung Cockpit accused Lufthansa of not having "moved a millimetre" despite its claims, and urged the airline's bosses to negotiate "seriously" or accept "an overall settlement".

In the previous round of strike action in mid-February, Lufthansa's low-cost subsidiary Germanwings was forced to scrap close to 340 outbound flights from Germany.

Overall in 2014, the repeated strikes cost Lufthansa an estimated €232 million.

Last week the airline said it expected to see a "tangible" improvement in its underlying earnings this year after profits nosedived in 2014.

Lufthansa's profits were hit by a range of factors last year, including changes in the value of a convertible bond it had issued in 2012, and losses on its options for fuel price hedging.

Strike action by its pilots also weighed on earnings.