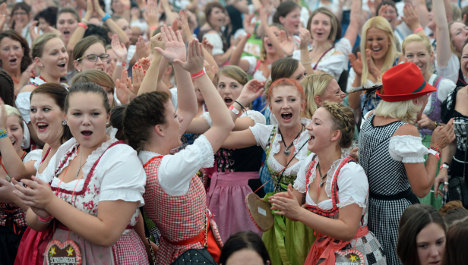 In 2014 the Munich authorities reported that an incredible 6.5 million litres of beer were sold during the festival, renowned the world over for offering some of tastiest – and at €10 a litre, most expensive – beer you can get your hands on.

But the actual amount of beer sold was even higher. According to the Münchener Merkur, 7.7 million litres of beer were sold during the 16-day bacchanal.

The city authorities, who publish sales figures on the final day of the festival, told the Munich-based daily that the numbers are “merely an estimation by the beer sellers,” adding that they are “not hard numbers.”

A spokesperson for the beer sellers told the Münchener Merkur that the discrepancy was due to a “calculation error.”

He also blamed the city authorities, saying that they demand the numbers before they are fully compiled.

But almost every tent at the festival now has an electronic payment system, meaning that the quantity of beer sold can be calculated minute-by-minute.

In fact, it appears that the beer sellers have been consistently getting the numbers wrong for several years.

For some reason the published quantity is always less than the actual number of sales and the discrepancy is becoming ever larger.

The lower sales figures have the effect of masking the increase in consumption which has taken hold over the last decade.

Philipp Vetter of the Münchener Merkur explained to The Local that the numbers published at the end of the festival are for the consumption of the Munich public.

“The beer sellers want to maintain the image of Oktoberfest as a family festival,” he explained, saying that unwelcome side effects of the event had spilled over into the city's streets, upsetting locals.

“They try to maintain the idea that for every visitor to the festival there is roughly one litre of beer drunk,” Vetter added. In 2014 6.3 million people attended the festival and the initial report claimed that 6.5 million litres of beer were sold.

Since 2004, the number of people going to the festival has increased by 7 percent, but beer consumption has risen 26 percent, from 6,1 million litres to 7.7 million litres.

In 2014 the first case of alcohol poisoning was reported two hours after the start of the event. This was the first of 681 Alkoholleichen ('alcohol corpses' or people passed out from overconsumption) that the Red Cross had to deal with over the next 16 days, an increase from 631 for 2013.

The organisation Sichere Wiesn, which counsels women who have suffered sexual assault, reported caring for 206 women at their security point at the festival in 2014, an increase of 50 from the previous year.