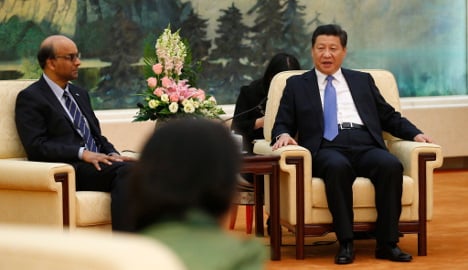 Germany, France and Italy "want to bring our long experience … to help the bank build a solid reputation," Schäuble said at a joint press conference in Berlin with Chinese vice-premier Ma Kai.

"We want to make a contribution to the positive development of the Asian economy, in which German companies are actively taking part," he said.

France and Italy have also agreed to become members of the $50-billion institution, seen as a rival to the World Bank, the newspaper reported, citing European officials.

The decision came a week after Britain announced it would join the bank, which was launched last year by Chinese President Xi Jinping. The bank is seen as being part of China’s plans to widen its international influence.

UK Finance Minister George Osborne said the move would give British firms the best opportunities to invest and work in the world’s fastest growing markets as parts of the country’s long-term economic plan.

But London's decision drew a cautious response from Washington, in a rare note of discord in their "special relationship", and followed criticism from the US about Britain's cuts to defence spending.

The FT said the move by Germany, France and Italy was a major diplomatic setback for the Obama administration, which argues that western countries would have more influence as non-members and could push for the bank to hold itself to higher lending standards.

Washington also has concerns about the bank’s standards of governance as well as environmental and social safeguards.

There are also worries that the institution, which aims to attract investment in infrastructure in areas such as transport, energy and telecommunications throughout Asia, would contribute to the spread of China’s “soft power” in the region, at the expense of the US.

The FT reported that Australia is also now rethinking its position.

Martin Schulz, the president of the EU parliament, was quoted by Reuters as saying that he welcomed the four European nations joining the AIIB, but stressed that the bank must conform to internationally accepted standards.

China and 20 other countries signed a memorandum of understanding to establish the Beijing-headquartered bank in October.

The bank has support from countries including India, Singapore, Malaysia, Cambodia, Pakistan, the Philippines, Uzbekistan and Vietnam.