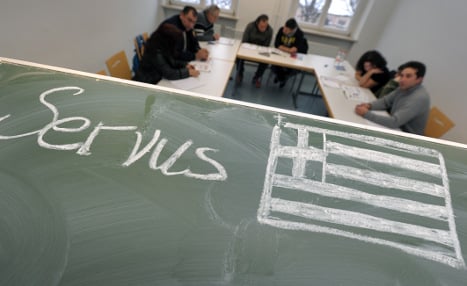 Servus - a south German "Hello" - on a blackboard at a German class for foreigners. Photo: DPA

The report, published on Monday by the Federal Office for Statistics (Destatis), shows that the number of new foreigners living in Germany rose 6.8 percent compared with 2013.

Dr. Gunter Brückner from the Federal Office for Statistics told The Local that the surge in immigration had three causes – Germany's economic strength; the recently earned right to freedom of movement for Romanians, Bulgarians and Croatians; and the refugee crises in Syria and Eritrea.

The majority of all immigrants (60 percent) came from other EU member states.

Unsurprisingly, there was a very high level of immigration recorded from the EU's three newest members, Romania, Bulgaria, and Croatia.

Citizens of the former two were granted freedom of movement within the EU at the beginning of the year.

Brückner described these immigrants as “young, well educated people who see a better future in Germany than they do in their homelands.”

The proportion of immigration from Mediterranean states, which have been badly affected by the Eurozone crisis, fell in comparison with 2013.

Nonetheless 48,641 people still made the move from Greece, Italy or Spain, where levels of unemployment remain stubbornly high.

“Germany came through the crises of the recent years, from Lehman brothers on, in clearly better shape than its neighbours,” said Brückner.

Another country which significantly contributed to the numbers was worn-torn Syria. Over 60,000 Syrians made it to Germany, an increase of over 100 percent on the previous year.

In terms of where new immigrants want to live, the south remains the most attractive destination. 193,100 new foreigners were registered in the affluent states of Bavaria and Baden Wüttemburg.

Brückner says that there is a reinforcing trend at work here, with immigrants heading to areas where they already have family.

Bavaria is second only to North Rhine-Westphalia in terms of the total number of foreign inhabitants.

But the southern states' strong economies and low unemployment also contribute to the attraction.

The states with the highest percentage increase of immigration compared with 2013 are both east German.

Mecklenburg-Vorpommern recorded a 19.9 percent increase on immigration numbers in comparison with 2013, with Brandenburg also recording a significant proportional increase (13.4 percent).

Brückner warns that this is due to the very low number of immigrants that lived there at the end of 2013, speculating that most of those who moved there had no choice.

“The government divides up refugees between the different states. I suspect that the rise in immigrants in the east is due to this,” he said, adding that there was still some truth to the stereotype that the east is a “no-go area” for foreigners.