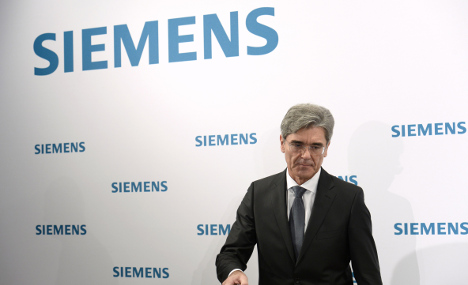 Under a number of accords agreed between the parties, Siemens will build a "4.4 gigawatt combined cycle power plant and install wind power capacity of 2 gigawatt", the company added in a statement.

Other projects would include building a factory in Egypt "to manufacture rotor blades for wind turbines".

Under two further memorandums of understanding (MoU), Siemens will also propose to build additional "combined cycle power plants with a capacity of up to 6.6 gigawatts and ten substations for reliable power supply", the statement added.

The spokesperson told AFP the projects covered by the MoU would be worth a further six billion euros.

The agreements were signed at a global investor conference in the Egyptian resort of Sharm el-Sheikh by Kaeser and Germany's Vice Chancellor Sigmar Gabriel.

The conference is aimed at jump-starting the Egyptian economy after years of turmoil.

Foreign investment has plummeted since the 2011 uprising that ousted long-time president Hosni Mubarak.