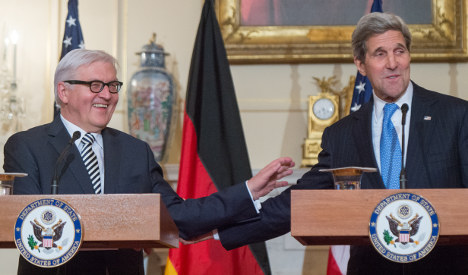 “We are both still far from happy. Now we have to maintain the pressure on the belligerents,” Steinmeier said.

He called on his Russian counterpart Sergei Lavrov to use his influence with pro-Russian separatists in eastern Ukraine to uphold the patchy ceasefire which has been in place in recent weeks.

“We all insist that the withdrawal of heavy weapons needs to take place on both sides, and we all insist that it is critical that Russia cease its support for violations of the integrity of Ukraine and its sovereignty,” Kerry said.

Nato Secretary-General Jens Stoltenberg said on Wednesday that the alliance feared the separatists might withdraw their heavy weapons from the front line only to prepare a new offensive. “We welcome the ceasefire, but it's critical that the observation be improved,” he said during a visit to Nato military headquarters at Mons in Belgium.

Earlier in Berlin, the International Monetary Fund (IMF) and international community announced it would make a $17.5 billion loan to Ukraine, extending what was previously an aid programme for cash-flow problems over the long term.

IMF director Christine Lagarde said that most of the money would be in Ukrainian hands within just a few months, hopefully making for “immediate economic stabilization” of the country.

Russia and the Putin sympathisers

Meanwhile, Russian deputy Foreign Minister Sergey Ryabkov accused the USA of using the crisis as an excuse to put pressure on Moscow.

He particularly criticized the US' recent troop deployments in the Baltic states and said that Russia would not let it go unanswered.

And former Chancellor Helmut Schmidt warned that the West should try to see things from Russian President Vladimir Putin's point of view.

It was “not completely out of the question” that the Ukraine conflict would “in fact turn into a 'hot war',” he told Bild on Thursday.

But for Putin, Ukraine was a sideshow compared to the threats Russia believes it faces on its southern and eastern borders from China, Pakistan and former Soviet republics in Central Asia, Schmidt said.