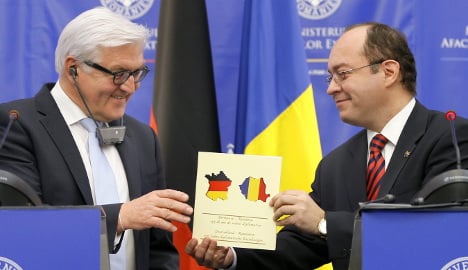 "We are ready to support the discussion process" regarding the bloc's two poorest members, Foreign Minister Frank-Walter Steinmeier – flanked by his Romanian counterpart Bogdan Aurescu – told a press conference in Bucharest.

The Schengen agreement imposes border controls on people entering and leaving the zone, but none on travels within the bloc. It has already been signed by 26 countries, 22 of them EU members.

"The security situation has changed" but "we are going to continue working hard" so non-Schengen countries can meet membership requirements, Steinmeier added.

A January report by the European Commission highlighted the progress made by Bulgaria and Romania in the area of judicial reform.

"The interior ministries will have to decide their next steps," Steinmeier said.

Though Romania and Bulgaria have been EU members since 2007, they have been trying to win entry into the passport-free zone since 2011 without success.

Romania's Prime Minister Victor Ponta said in December his country was finally ready to be part of the Schengen area, which he noted was an opinion "shared by most European leaders."

However, some nations, like the Netherlands, have said Bucharest and Sofia must make more progress in fighting corruption and securing their borders before they can join. France has also expressed reservations.