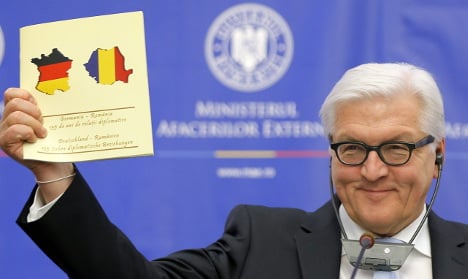 Steinmeier was photographed smiling as he accepted the slim volume from his Romanian counterpart Bogdan Aurescu at a news conference marking 135 years of diplomatic relations.

But the Foreign Ministry later apologized, saying that the brochure had been produced by national news agency Agerpres, telling the Associated Press that the misplaced map had been a “regrettable technical error”.

“The misprint was a technical error on the part of Agerpres that we assume and for which we apologize both to the Romanian Foreign Ministry, as well as to the German Foreign Ministry,” the agency said in a statement on Monday night.

It had been a special, one-off edition of a series of standard brochures drawing on the agency's archives produced by Agerpres for meetings with representatives from the UK, the USA, France and Germany, they said.

Steinmeier responded to an apology from Aurescu later in the day by saying that he hadn't even noticed the mistake.