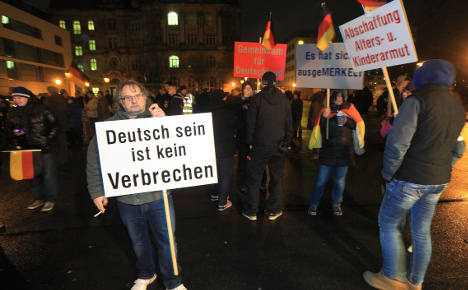 A Magida demo in Magdeburg in February 2015 Photo: DPA

Far-right groups have been marching since the start of January in Tröglitz, with the latest demonstration planned to finish outside the house of the mayor.

This was one step too far for Markus Nierth, who did not want to subject his family to the "hate-filled slogans of over 100 neo-Nazis" and the armed police who would be present to protect them.

Nierth has become a target of the far-right party NPD because of his support for an initiative to host 50 asylum seekers in the small town.

Local politicians have since condemned the demonstrations and expressed their support for Nierth.

Wulf Gabert, leader of die Linke in the Magdeburg state parliament, told Tagesspiegel that "when people like Markus Nierth who speak out for a united and cosmopolitan Saxony-Anhalt become isolated, then we are on our way towards a cold, racist society."

In a separate case, the mayor of Magdeburg has also become the target of right-wing extremists. In the space of a month, Lutz Trümper received three death threats.

All three death threats were signed with the Nazi salute and a swastika. Trümper is now under heavy police protection.

At the start of February a comment appeared on the Magida (Magdeburg equivalent of anti-Islam movement Pegida) Facebook page that said "A tree, some rope… Trümper etc".

Sebastian Striegel, Green party member of the regional parliament, tweeted: "It is cold here: smear campaigns against refugees, death threats against politicians, mayors resigning out of fear for their families".

Meanwhile according to reports in the Sächsische Zeitung, regular talks are taking place between the Pegida movement and local CDU politicians.

Member of the Saxony state parliament, Lars Rohwer, is thought to be coordinating the talks. He has been quoted praising Pegida for managing to "put questions regarding the system back on the agenda".

Rohwer also compared the anti-Islam movement to the student protests in 1968.

Pegida leader Lutz Bachmann, who was recently reinstated despite controversy over racist comments and a Hitler selfie on Facebook, declared the discussions as a sign that "Pegida has managed to get ordinary people engaged in politics again."