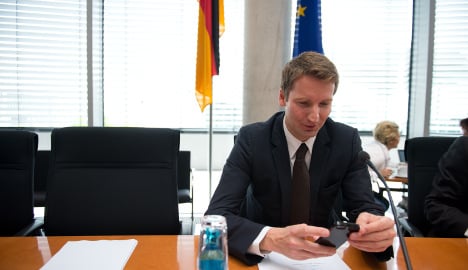 Parliamentary officials immediately packed it in a lead-lined container (to block wireless signals) and sent it for testing at the Federal Office of IT Security (BSI) in Bonn by ordinary DHL parcel post.

It was the first time an MP's phone had had to be transported in this way.

But the Bundestag confirmed to Die Welt that the BIS found the signal-proof container had been opened before the phone arrived at their offices.

Authorities have now launched an investigation into persons unknown over the opening of the container, while the BSI attempts to discover what might have been extracted from the device – a process that will take several weeks.

As leader of the NSA inquiry, Sensburg regularly works with classified files as the MPs try to identify misdeeds by intelligence agencies in the wake of revelations by NSA whistleblower Edward Snowden – including the fact that Chancellor Angela Merkel's phone was tapped.

The inquiry was recently the target of an intimidation attempt by British spy agency GCHQ, which threatened to withdraw intelligence co-operation with Germany if the MPs probed the relationship too deeply.

This week, they are hearing a former head of department from Germany's own foreign intelligence service, the Bundesnachrichtendienst (BND).

Sensburg and the leaders of each party's team in the committee – who have access to more sensitive information than the other MPs – carry encrypted phones, and all the members have safes in their offices.

Internal intelligence (Verfassungsschutz) officers warned the members that they were extremely attractive targets for spying attempts and should be concealing their communications.

Government administrators have taken delivery of around 3,000 encrypted smartphones since the Snowden revelations, and expect the number to increase in the coming years.

But the €2,000 devices, mostly made by Canadian smartphone company Blackberry and encrypted by German company Secusmart, are only certified for information at the lowest level – “Classified” – of Germany's four secrecy ratings.

Many users have also complained that the phones have poor battery life, delays in conversations and poor sound quality.

SEE ALSO: British spies tell German MPs to back off