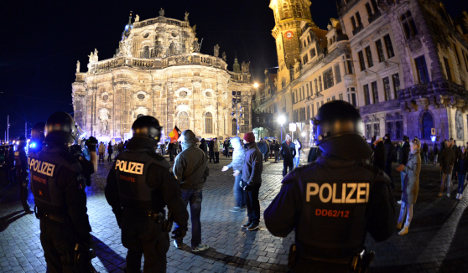 Broadcaster MDR reported that there had been “scuffles” and “brawls” between the Pegida members and refugee supporters, but police told Spiegel that the meeting had not escalated beyond “verbal provocations”.

Pegida supporters chanted “get out, get out!”, the Sächsische Zeitung reported, while the Dresdner Neueste Nachrichten wrote that there were calls of “Germany for the Germans” during the confrontation.

Between 100 and 150 Pegida members had broken off from the group's 6,200-strong demonstration at the Neumarkt – a big increase from the 4,800 last week – and made for the Theaterplatz.

Around 500 refugees and activists from groups including “Asylum Movement”, “Dresden for All” and “Dresden Nazi-Free” were holding a demonstration and concert there after setting up a tented camp over the weekend, which was still in place despite an official order to clear it by Monday evening.

Police told the Sächsiche Zeitung that they deployed 300 officers to keep the two groups apart, while the activists themselves formed a human barrier around the tents.

But fireworks and bottles were still flung between the two groups.

Markus Klee, a representative of the pro-refugee organization, confirmed to MDR that there had been a “tense atmosphere”, although it later calmed down.

Pegida had been on a downward trend in participation since organizer Lutz Bachmann stepped down in January over a photo of him styled as Hitler. His resignation was swiftly followed by those of other leading members.

But Bachmann has since returned and numbers have begun to swell again.