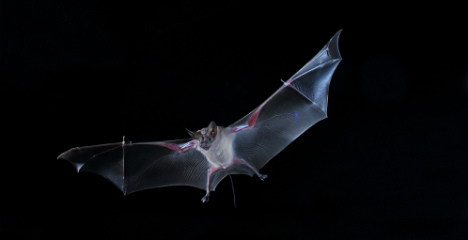 There are currently 4.500 bats spending the winter in Berlin, living in 35 different colonies. This is a significant increase on the winter of 1998/99 when only around 800 bats inhabited the city in 19 colonies.

"The majority of the bats which winter in Berlin come from the city's surroundings, normally at a distance of 60-100 kilometres, where the Brandenburg forests are," Karsten Kallasch, a bat expert who gives tours around Berlin's bat colonies, told The Local.

"Others are indigenous to the city, while some come from further afield."

In all, 17 species of bat have been spotted in Berlin including Daubenton's bat, Pipistrels, and Serotine bats.

The largest colony makes its home in the waterworks in Tegel, where 1,600 bats inhabit unused parts of the building. The waterworks in Friedrichshain boast a population of 1,500.

The bats also seem to have preferences according to the cold war division of the city into east and west, although this is more to do with body shape than ideology.

Pipistrel bats are so small that they can get through holes in the facades of Plattenbauen (East German apartment blocks).

The Serotine bat, on the other hand, is fatter and seems to prefer the generous roof space of west Berlin's Altbau architecture.

Although the news from Berlin is positive, on the national level many bat species are endangered.

According to the Nature and Biodiversity Conservation Union (Nabu), four of Germany's 24 indigenous bat species are threatened with extinction, while eight other species are on the endangered list.

"The cause of this drastic fall in the number of bats is the intensive farming of our countryside," said Nabu  President Olaf Tschimpke at a conference to mark World Wildlife Day on Monday.

Christian Voigt from Leibniz institute for Zoological Research says that more must be done to protect bats, pointing to the threat caused to them by wind turbines.

In an article published in "the European Journal of Wildlife Research." Voigt claims that as many as 250,000 bats a year could be killed by wind turbines placed in ecologically sensitive areas.

"In Berlin bats are also endangered," explains Kallasch. The situation has improved considerably from the late 90s when numbers were at an all time low.

But there is still a long way to go to return to the situation in the 1980s, when bat colonies thrived.

"30 years ago 200 Daubenton's bats were counted at the Tegel waterworks; this year the number was 60."

That bats are recovering their former status in Berlin is due in large part to efforts that have been made to protect their habitats.

"The focus of our habitation management programme is to expand the colonies in Tegel and Friedrichshain waterworks" a spokesperson told the Berliner Zeitung.