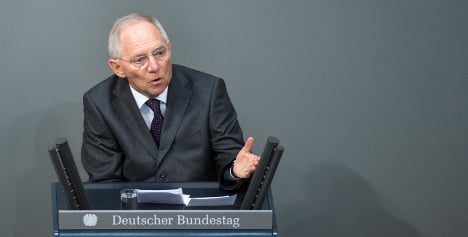 Finance Minister Wolfgang Schäuble had earlier told MPs that he was not asking for a "change" to Greece's bailout programme, but an extension "to successfully bring it to an end".

He added that while there was flexibility in the programme, Greece could not make changes without the consent of its European partners.

And he said that many European countries had lower minimum wages and living standards than the Greeks.

"The Greeks should think about that when they call for solidarity," he said.

Taking flight into philosophy, Schäuble called on his colleagues to remember that Germany is "the land of Immanuel Kant".

"When we come to a reasoned decision, we should think: what would happen if everyone made this decision?"

Since Germany was better off than many other countries, it should bear some of the burden of solidarity, he said.

Almost all the speakers at the debate were in favour of extending support to Greece.

But the Left (Linke) and the Green party both accused Chancellor Angela Merkel's government of hobbling Greece's chance for economic recovery by insisting on painful austerity measures.

The speech served to illustrate the balancing act the German government is performing, standing as it does between the need to keep Europe and the single currency together and irritation with what it sees as unreasonable demands from the new Greek government.

Schäuble urged fellow conservative deputies to back the bailout reprieve on Thursday despite his "disbelief" at renewed comments from his Athens counterpart.

Pressure from Greece's debt of €320 billion – equivalent to 175 percent of its annual economic output – is so severe that Tspiras wants to renegotiate repayment obligations during the four-month bailout extension clinched Tuesday after gruelling negotiations with creditors.

That disbelief is shared by the public, just 21 percent of whom agreed with the idea of continuing to help Greece in a poll this week.

"No more billions for the greedy Greeks!" demanded mass daily Bild on Thursday, printing a huge "Nein!" (No), which it urged readers to hold up for selfies, some of which it published on Friday.

A contrary "Yes! Yes! Yes!" was the response in commentary on news site Spiegel Online.

"We need … a loud 'Yes' to the euro, to Europe and to the legacy of Helmut Kohl," it said, referring to Germany's ex-chancellor, a driving force behind European enlargement and integration after the fall of the Berlin Wall.

The International Monetary Fund and the European Central Bank, which together with the eurozone states hold most of Greece's debts, have also expressed misgivings.

Merkel has said the extension is just a "starting point" and that Berlin is under "no illusions" about the challenges ahead.

Alexander Kritikos, research director at the German DIW economic institute, said Greeks had an "old habit" of focusing their anger just on Schäuble, but others such as Finland, the Netherlands and Baltic states also took a firm line.