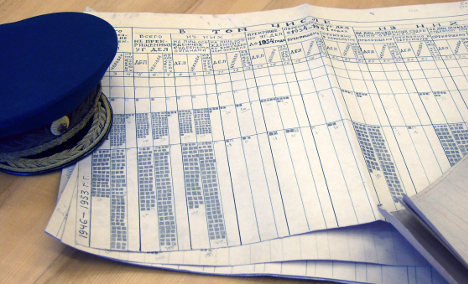 Tried and tested: KGB documentation. Photo: DPA
While Russian espionage has targeted European countries for many years, "distinct activities" of an old nature have been detected in information-gathering about Western responses to the conflict in Ukraine, media on Thursday quoted Hans-Georg Maaßen as saying.
Some tactics of the now defunct Soviet KGB were being revived, such as targeted disinformation and supporting extremist groups with a view to destabilizing a given state, said Maaßen, who heads the Federal Office for the Protection of the Constitution.
This was most evident in the eastern European countries bordering  on Russia, the domestic intelligence head told the 18th European Police Congress in Berlin on Wednesday.
He also warned that estrangement of Russia from the West posed a threat to the stability of Germany and Europe when there was a pressing need for cooperation to counter common threats.
"This  complicates the fight against Islamic extremism and terrorism at a time when we least need this," Maaßen added.
Nor could Germany indefinitely expect to escape some kind of Islamic terrorist attack, he said in comments reported by Die Welt and other media.
"We must assume that we too are a target of terrorist attacks and we must prepare accordingly," he said, stressing that Germany did not live on an "island of security". Organizations like the Islamic State (Isis) and al-Qaeda were pursuing a goal of destabilizing the West by spreading fear through terrorist attacks.
However, German authorities had no information that a concrete attack was being planned, Maaßen said.
Another evident goal was to spread jihadist ideology to Germany and other European states. This was most anticipated through the return to Europe of radicalised citizens who had fought in the conflicts in Iraq and Syria.
Of around 4,000 European citizens who travelled to the conflict zones, 600 were German nationals, of whom 200 had returned home, according to Maaßen. Seventy had died while abroad, at least ten of them in suicide attacks.
Another 70 of the 600 are thought to have participated in heavy combat or committed grave crimes while overseas. These had been so brutalized that they were regarded as potentially liable to commit violent attacks at home.
The authorities had no information about what the remainder had done during their time away.
SEE ALSO: BND spied on Germans living abroad