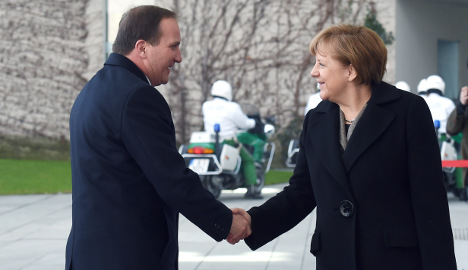 "We agree that people fleeing for their lives must be protected…[but] we need to get better distribution of refugees in Europe."

According to a recent report by human rights campaign group Amnesty International, Germany has received 46,265 new Syrian asylum applications in the last three years, and has promised 30,000 resettlement places.

Meanwhile, 50,235 people have sought asylum in Sweden in the past three years, which currently takes in more refugees per capita than any other European country. The Swedish government has pledged 1,200 resettlement places.

The remaining 26 EU countries have pledged just 5,105 resettlement places between them.

Merkel told reporters it was essential that the two nations exchanged positive experiences and promised "intensive cooperation" with the Swedish government on immigration and related issues.

"Germany is our largest trading partner. We have many Swedish artists in Berlin," he said.

The leaders also discussed the Ukraine crisis, Greece's financial problems and international security in the wake of the recent terror attacks in France and Denmark.

Describing the recent agreement to extend Greece's international bailout as a "starting point" for talks with the new left-led Greek government, Merkel said she was pleased that "in the last few days we managed to show we are all able to make compromises".

"We can not win the diplomatic battle and then have Ukraine collapsing. Sweden would like to contribute what we can. It is also important for our Baltic neighbours to feel that support," he said.