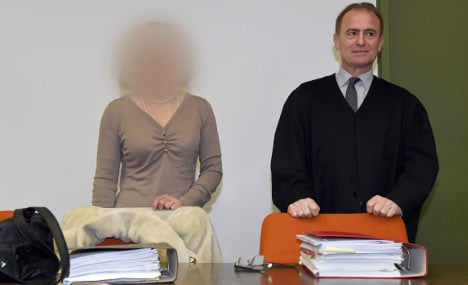 Back again. Sylvia Stolz before her second sentencing on Wednesday for Holocaust denial. Photo: DPA

Sylvia Stolz, 51, was sentenced to 20 months' imprisonment for telling an anti-censorship congress in Switzerland in 2012 that the “so-called Holocaust” under Adolf Hitler's National-Socialist (Nazi) Party had never been legally defined or proven, the Süddeutsche Zeitung reported.

In an almost 100-minute address, video footage of which was used as evidence in her trial, Stolz stated before a crowd of 2,000 people there was no hard evidence of either Nazi plans or orders “to partially or wholly destroy Jewry”.

Therefore it was in itself a breach of the law that people like her who defended others put on trial for Holocaust denial should be prosecuted, she argued.
Denial of the Holocaust is illegal in Germany and several other EU countries.
Stolz, whose husband is a jailed Holocaust denier, was sentenced on the same charge in 2008 and served three years and three months in a Bavarian jail before she was released in 2011.
The following year she accepted an invitation to speak at a conference organized in Switzerland by the 'Anti-Censorship Coalition' (AZK).
Three months after the event, a Swiss lawyer filed a criminal complaint, accusing her of transgressing Swiss race law by stating that the Holocaust was unproven in court and that findings on its location and time, perpetrators, methods and numbers killed were lacking.
At Wednesday's final hearing of the case at the Munich District Court, Judge Martin Rieder rejected the defendant's claim that she was protected by her rights to freedom of speech.
Hardly any other event in world history had been so well researched and documented as the extermination of Jews in Europe by the National Socialists, Rieder told the court.
Even if no written order by Adolf Hitler or his inner circle could be presented, it sufficed to read the Nazi leader's intentions as documented in Mein Kampf, he added.
Hitler's 1925 autobiographical manifesto clearly advocated the eradication of the Jews and other categories of people, Rieder said.
As well as a count of 'incitement of the people', Stolz's sentence included time for unauthorized use of an official title. Documentation was produced which carried her name and a lawyer's stamp, despite the fact that she was barred from practising after her earlier conviction.
Stolz was previously jailed for statements she made while defending Ernst Zündel, a German publisher known for his Holocaust denials. Zündel was jailed in 2007 for the offence.
Six million Jews were murdered during the Holocaust by the Nazi regime and its allies, as well as millions of ethnic Poles and citizens of the Soviet Union.
Hundreds of thousands of members of other minorities, including Sinti and Roma, disabled and homosexuals also died in Nazi death camps.