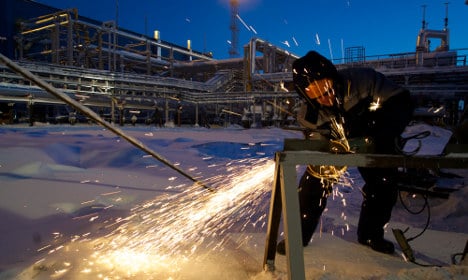 A worker at a gas facility in Siberia. Photo: DPA

Šefčovič called it “the most ambitious plan since the founding of the Coal and Steel Community” in 1951, the intra-European organization widely seen as a forerunner of the modern-day EU.

But the idea is sure to meet resistance among ministers in Berlin, who insist that the EU should continue to regard energy as a matter for national governments – a condition laid out in the treaties governing the EU.

Under Šefčovič's plan, barriers between the 28 national energy markets would be lifted.

He says that the move would reduce European dependence on Russian gas – taking away one of Russian president Vladimir Putin's biggest diplomatic weapons – and attract investors to the industry.

The plan would also see any new deals with producing countries, like Russia, subjected to scrutiny from the European Commission to make sure they comply with EU law.

In a parliamentary answer last year, the German government said that such deals were a matter for the private companies involved.

“German firms have signed long-term contracts with Russian companies, some of them with a duration of more than 20 years,” the answer read.

“The government is not party to the contracts and has no influence on their contents.”

Šefčovič's plan also includes a formula allowing several countries to band together to strike a cheaper deal with a supplier, an idea originally put forward by Poland.

“No member state should suffer from disadvantageous contracts that only result from a historically or geographically weak position,” Poland, the Czech Republic, Hungaria and Slovakia agreed in a position paper.

News of the plan came on the same day as Putin took to Russian state television, saying that he hoped for a peaceful resolution to the Ukraine conflict.

"If the Minsk Accords for a solution of the conflict in eastern Ukraine are fulfilled, then I'm convinced that the situation will gradually get back to normal," he said.

He added that Russia had no interest in a war with Europe, and that trust was returning between Russia, France and Germany after the Minsk talks.

"I think such an apocalyptic scenario  [as war] is very unlikely – and I hope it doesn't come to that," Putin said.

But he warned President Poroschenko of Ukraine that he must deal with pro-Russian separatists in a "civilized way" and said there was no going back on Russia's takeover of the Crimean peninsula last year.

Poroschenko had early called the Crimea an "occupied zone" which he wanted to bring back under Ukrainian control.