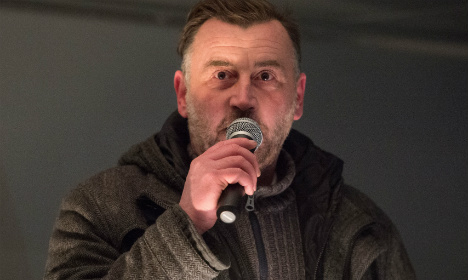 A secret vote held in recent days named Lutz Bachmann back to the helm of the organising team of Pegida, which stands for the Patriots against the Islamisation of the West.

"Lutz [Bachmann] will continue to function as one of the three leaders," the organisation wrote on its Facebook page.

In January, Bachmann stepped down following the exposure of racist comments that he had made on Facebook, as well as a photo of himself styled as Hitler, complete with toothbrush moustache.

The fallout from the photos was devastating. Not only did Bachmann step down, but it became the motive for former spokeswoman Kathrin Oertel as well as other founding members to leave and found their own protest movement called Direct Democracy for Europe (DDfE).

Only six of the so-called "orga team" remain part of the group.

Pegida has also seen its numbers dwindle drastically from their peak, when 25,000 people marched on January 12 following the Parisian terrorist attacks that left 17 dead, most of whom worked for the satirical magazine Charlie Hebdo.

The news comes a week after the movement announced it will be making a bid for mayorship of Dresden, though Bachmann himself cannot run due to his criminal record for burglary, theft and drug offences.

In 1998 he tried to avoid a three and a half year jail term by fleeing to South Africa, but he was deported back to Germany.

Pegida also announced there would be another march on Monday starting in Dresden's Neumarkt, registering an expected 5,000 participants. Counter demonstrations have also been registered.

In other cities, Pegida as well as counter demonstrations have been registered for Monday night.