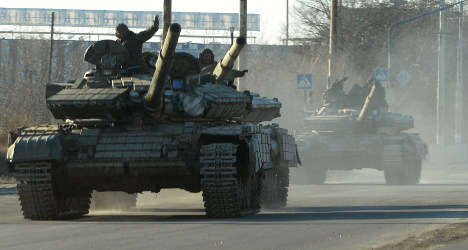 Asked by Germany's Bild newspaper where, for him, the red lines in the Ukraine conflict lay, Frank-Walter Steinmeier said they had been drawn in the Minsk ceasefire deal that Germany helped broker.

"An advance on Mariupol would clearly be in breach of the agreements" and impact its fundamental principles, the minister was quoted as saying in pre-released comments ahead of Monday's edition of the mass daily.

Ukraine's army and separatist rebels appeared Sunday to be complying at least partially with their truce accord, despite ongoing breaches of the ceasefire concluded in the Belarussian capital.

Last week, however, rebels launched an assault on the strategic town of Debaltseve in what the US called a violation of the agreement.

Fears are also rising over Mariupol, a government-held port city that is rapidly becoming another flashpoint. Continued shelling has been reported there and Kiev alleges that 20 Russian tanks have been deployed near it.

Ahead of talks Tuesday in Paris between the foreign ministers of Germany, Russia, France and Ukraine, Steinmeier also urged his Moscow counterpart to exert more pressure on the separatist rebels.

He was quoted as saying there were "first signs" that could lead to "at least a certain detente," including prisoner swaps and an apparent readiness to begin pulling back heavy weapons at key points.

Separatists need to stop their military activity, Steinmeier said, adding: "It is Moscow's task to exert further pressure on the separatists here.

"I've also said that to my Russian colleague in the many telephone calls of recent days."