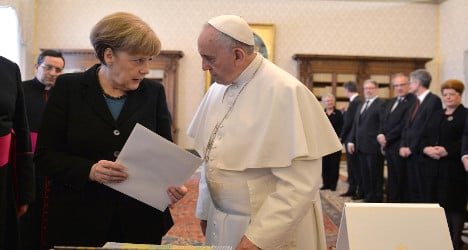 Merkel, who played a key role in negotiating the latest ceasefire, had a private audience with the pope where the two underlined their "commitment to reaching a peaceful solution to the conflict in Ukraine", a Vatican statement said.

Francis and Merkel also discussed poverty, women's rights, health and the environment — topics the will be on the agenda at the G7 summit Germany will host in June, the statement added.

The German chancellor arrived in Rome on Friday with a 15-member delegation and paid a surprise visit to the Sistine Chapel and the Vatican Museum, a Vatican source said.

This was the third meeting between Merkel and the Argentine-born pope who had met twice before in 2013.