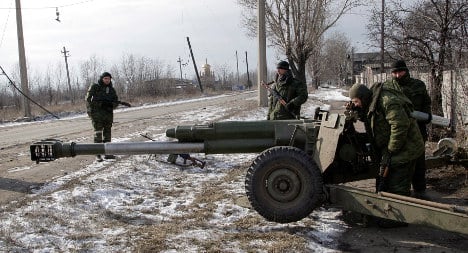 "The ceasefire has been violated several times. It must now be fully respected along the entire front line," Hollande told a news conference.

"It's difficult, it will take a long time, we don't have any illusions, and having seen how the negotiations have unfolded, it will not be a process that will move forward easily," said Merkel.

#Merkel in Paris on #Ukraine: Definitely worth to do everything possible to avoid further bloodshed. pic.twitter.com/OBoBnQDq2J MT @RegSprecher

A ceasefire brokered by France and Germany was signed last week in the Belarussian capital Minsk, but quickly collapsed as fighting continued between Ukrainian government and separatist forces.

The foreign ministers of Russia, France, Germany and Ukraine will meet in Paris on Tuesday to discuss the conflict, French Foreign Minister Laurent Fabius said.

Hollande and Merkel said they were "even more convinced" that the only solution rested on the implementation of the latest Minsk agreement, including the withdrawal of heavy weapons and release of prisoners.