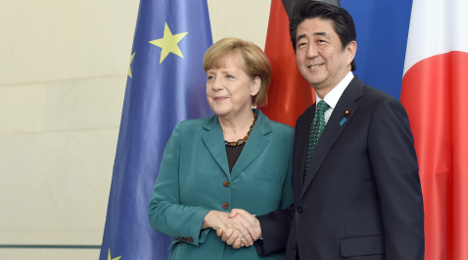 The planned visit comes after Abe visited Germany last year, and after Merkel visited Japan in 2008 to attend a Group of Eight summit.

"We are coordinating Chancellor Merkel's visit to Japan in early March but details are yet to be decided," a foreign ministry official told AFP.

The visit comes as both countries prepare to mark the 70th anniversary of the end of World War II, as Abe's views on history continue to come under the international spotlight.


At a foreign ministers' meeting in Tokyo in January, Fumio Kishida told Frank-Walter Steinmeier "Japan and Germany should both announce positive messages to the world mentioning past contributions to the world's peace, stability and prosperity".

Merkel is scheduled to give a speech to the public on March 9, an event hosted by the Asahi Shimbun newspaper.