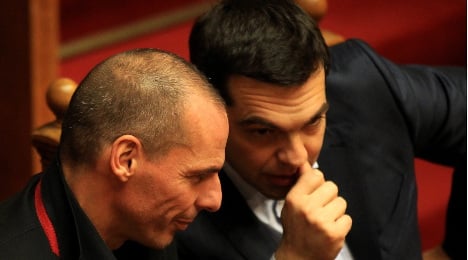 “The letter from Athens is not a substantial suggestion for a solution,” Finance Ministry spokesman Martin Jäger told dpa in Berlin.

A eurozone 'working group' was to examine the proposal on Thursday before a meeting of finance ministers from countries using the single currency on Friday in Brussels.

But Jäger told journalists that the letter was simply aimed at obtaining a bridging loan, rather than fulfilling Greece's obligations under its bailout programme.

“The letter does not correspond to the criteria agreed at the Eurogroup meeting on Monday,” he said.

No details of the letter have yet been made public, meaning that it is so far unclear what conditions Athens is prepared to accept in exchange for continued emergency loans from its international creditors.

Greek government sources had said earlier that creditors should be able to accept 95 percent of their suggestions and undertakings.

The radical left Syriza government plans to pay all of its debts and recognize its obligations, as well as binding itself not to take any unilateral decisions that would increase its deficit – although it hopes to bring in measures to lighten the burden on people suffering under austerity measures.

Jeroen Dijsselbloem, the Dutch finance minister, tweeted that he had received the letter at 10:30 am.

Greece's previous bailout agreement with its creditors – other nations using the Euro single currency and the European Central Bank (ECB) – runs out at the end of February, meaning the country could be threatened with bankruptcy unless it finds new financing.

The last possible moment for the newly-elected radical left Syriza government to apply for an extension was on Friday, as several euro countries, including Germany, will have to seek approval from their parliaments for an extension.

German finance minister Wolfgang Schäuble has insisted that Greece stick to the bailout terms agreed with previous governments, under which the country must make painful structural reforms in exchange for financial support.

In negotiations over the past week, Finance Minister Yanis Varoufakis and Prime Minister Alexis Tsipras have sought to soften the reform programme demanded by creditors, which they say has plunged the country into poverty.

Varoufakis said on Wednesday evening that the request for aid would find a compromise between both sides' demands.

“Day by day, hour by hour, we're getting closer together,” he said.

On Wednesday, the ECB decided to continue supporting Greek banks with emergency funds known as Emergency Liquidity Assistance (ELA), extending its limit to €68.3 billion from €65 billion.

The news came on the same day as rumours that the ECB would like Greece to impose capital controls to stop the banking sector from hemorrhaging funds, although the bank denied any official discussions or proposals.

"The ECB Governing Council and the ECB banking supervisors would feel better if there were capital controls to prevent the hemorrhaging of the banks," an unnamed ECB source was quoted as telling the Frankfurter Allgemeine Zeitung.

A spokesman for the Frankfurt-based ECB later told AFP that "there was no such discussion in the Governing Council" that met the previous evening.

The newspaper report said central bankers had recently been discussing why Greece had not yet introduced capital controls after more than €20 billion had been withdrawn from Greek bank accounts since December.

A capital control regime – which is allowed under EU rules and was used by Cyprus in early 2013 – allows a government to limit cash withdrawals and overseas transfers and to restrict banks' business operations.