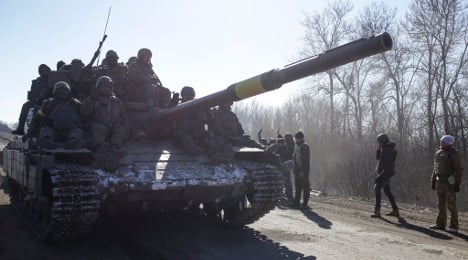 Ukrainian government troops ride a tank on the way out of Debaltseve on Wednesday. Photo: DPA

“This will bring great suffering, further serious need to the people of the region,” government spokesman Steffen Seibert in a press statement.

They said that it was “inexcusable to stick to a failed ceasefire agreement” that Russia and its “proxies” continued to ignore.

“In the absence of greater Western support for Ukrainian forces, a Russian-imposed military solution is exactly what will continue to unfold,” the senators said.

There had been continued fighting between pro-government troops and surrounding rebel forces over the vital railway junction in recent days, despite the ceasefire having officially come into effect at midnight on Sunday.

Government soldiers finally began withdrawing early on Wednesday morning, with Ukrainian president Petro Poroshenko saying that the retreat was proceeding “according to plan” in Kiev.

Poroshenko had described the rebel advance as a “cynical attack on the Minsk Accords” in a telephone conversation with Chancellor Angela Merkel on Tuesday evening., before travelling to the surrounding Donbass region on Wednesday.

In a phone call with US Vice-President Joe Biden, Poroshenko also renewed his appeal for American weapons to arm his men for the fight against the rebels.

The guns had largely fallen silent in Donbass region by Tuesday night, although both sides reported continuing gunfire in the town of Debaltseve itself.

Separatist leaders claimed that a large number of government troops had surrendered and been taken prisoner.

Putin had called for the pro-Kiev soldiers to give up during a visit to Hungarian capital Budapest on Tuesday.

Meanwhile, the UN Security Council passed a resolution introduced by Russia on Tuesday evening calling for both sides to implement the terms of the Minsk accords.

Russian ambassador to the UN in New York Vitaly Churkin said that there was now a real chance for the situation to improve, in contrast to Ukrainian representative Yuri Sergeyev, who said his country was sliding into war.

Sergeyev, along with US ambassador Samantha Power, accused Russia of pretending to stand behind the peace agreement while continuing to support the rebels in secret.