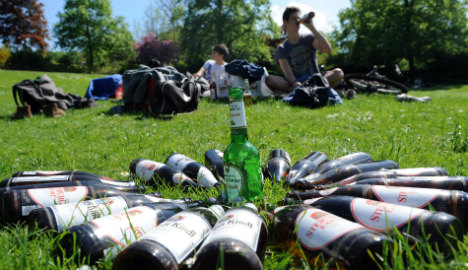 Day drinking it is! Photo: DPA

Peter Trapp, who represents the Berlin suburb of Spandau for the Christian Democratic Union (CDU) told the Berliner Zeitung that in order to reduce the work of first responders, Berlin has to make a last call.

"Now is the time to discuss it," Trapp said in an interview published Monday.

Berlin's cool image partly comes from its easy and inexpensive access to alcohol through bodega-like shops affectionately called a "späti".

Trapp hopes to shut down the spätis after 10pm, as well as ban petrol stations from selling alcohol after the cut off time.

"There should be no more alcohol available at night from inexpensive sources," Trapp said.

In 2010, Stuttgart imposed the same ban – to great success, says Trapp, citing a recently released report that showed that the number of young people turning up at hospitals with alcohol-related ailments dropped by seven percent.

Trapp is looking at that success and hoping to replicate it in Berlin.

The study authors, the German Institute for Economic Reseach in Berlin (DIW) and the Hamburg Center for Health Economics, said that even in the first 22 months there were 700 fewer patients with bodily injuries in hospitals in Stuttgart.

"If so-called binge drinking can be reduced by making alcohol more difficult to obtain, than a night-time ban on alcohol sales is an interesting political approach for other states," the study authors concluded .

Trapp hopes to bring a ban in first for a year with plans to extend it after it proves a success.

Elsewhere in Berlin government chambers, Trapp's plans were met with opposition from other parties.

"Who should control this ban? The police don't have any more capacity. Already, the number of officers is insufficient," Bodo Phalzgraf, Berlin's representative of the police union (DPoIG) told the Berliner Zeitung, adding that Trapp's plan is a "pipe dream".

Trapp still has to get his own party to agree to bringing the ban to the Berlin Senate for discussion before trying to convince the rest of the government to sign on.