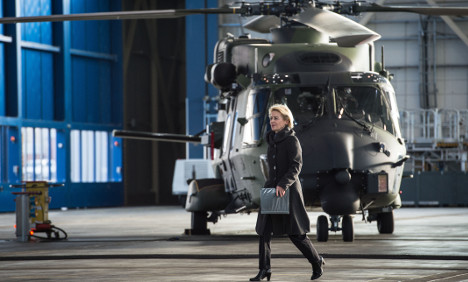 Defence Minister Ursula von der Leyen at an inspection of the NH90 helicopter. Photo: DPA
In her first big armaments deal since she was appointed in December 2013, Defence Minister Ursula von der Leyen has come under attack for supposedly paying well over the odds for the large consignment of new helicopters for the military.
The delivery of 168 combat and transport helicopters is now estimated at €8.7 billion, some €430 million more than had been projected in 2013 under her predecessor Thomas de Maizière, media reported on Tuesday, citing leaked defence documents.
A main reason for the disparity is the previous failure of the ministry to factor in the cost of spare parts and maintenance for the Sea Lion naval helicopters in the contract, according to the documents.
And instead of the original order of 202 Tiger, Sea Lion and NH90 helicopters – all built by firms belonging to Airbus –  the new order has 34 fewer aircraft.
De Maizière, also from the Christian Democrats (CDU), reduced the number of aircraft ordered in 2011 amid broader cuts to the armed forces.
The army will now receive 82 instead of 122 NH90 transport helicopters for €3.77bn instead of €4.69bn; and 68 instead of 80 Tiger attack helicopters for €3.55bn instead of €3.77bn.
Only 40 of the Tigers will go into service, while the rest will be used for spare parts.
The navy will receive an additional 18 Sea Lion helicopters specially fitted for naval use for €1.38bn.
Overall, Airbus and its subsidiaries are delivering less aircraft for more money, which the CDU's coalition partners have seized upon in harsh criticism of what's been termed the 'mega deal'.
"Ursula von der Leyen has not substantially improved the content [of the deal]," Tobias Lindner, an MP with the Greens, was quoted as saying by Spiegel Online "All together the whole deal remains a bad and questionable one. Those who deemed the outline agreement bad (in 2011) should not vote in favour of it today either."
The deal was not "optimal", a defence ministry spokesman told dpa news agency. "But it is nevertheless the best one we could hammer out."
The Bundestag's budget committee will decide on the deal in the coming week, but the main partners in Germany's grand coalition government are expected to push it through.
However, as well as apparent overspending, a raft of technical concerns have also overshadowed work on the purchase.
The NH90 aircraft made the headlines repeatedly in recent months due to problems with its engine and also glitches in the software used in its maintenance.
In June, an NH90  medical evacuation flight from Uzbekistan to Afghanistan had to make an emergency landing after an engine exploded just four minutes into the journey.
The crew escaped unharmed, but subsequent examinations showed that several more of the aircraft had developed similar engine problems.
The Netherlands have also complained about corrosion caused by sea air to the naval variant, warning of operational restrictions this brought as well as immense maintenance costs.
Germany's federal audit office has also criticized the helicopter deal, saying the ministry had "not taken into account the corrosion problem" and instead relied on vague assurances issued by the manufacturer.
SEE ALSO: German helicopter fleet 'not fit for Nato'